"This Jackdaw approval is a scandal," said one campaigner. "The government knows that burning fossil fuels drives the climate crisis, yet they're approving a new gas field." 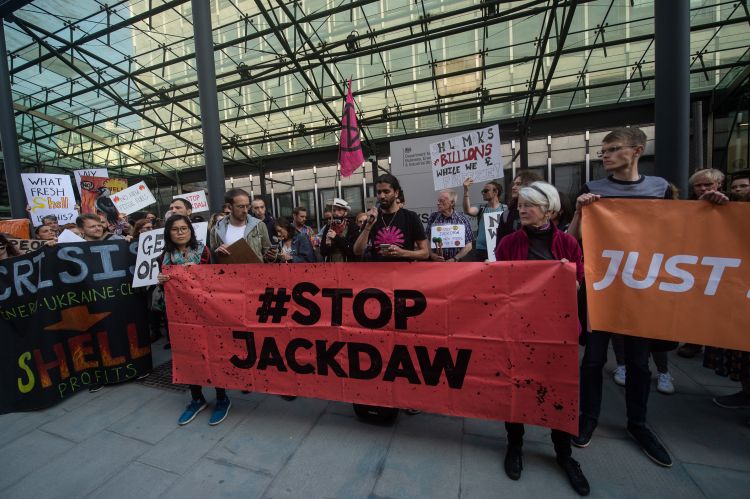 Greenpeace filed suit against the United Kingdom government on Tuesday, contending that the recent approval of a new North Sea gas field was unlawful because officials refused to evaluate how greenhouse gas pollution from Shell's so-called Jackdaw project will exacerbate the climate emergency.

When the U.K. government greenlit more drilling off the coast of Aberdeen on June 2 without an adequate assessment of the overall emissions impact, it failed to uphold its legal obligation to account for the climate damages caused by the increased extraction and burning of fossil fuels, Greenpeace argues.
Greenpeace estimates that if burned, gas extracted from Shell's Jackdaw development will generate more carbon dioxide than the annual emissions of Ghana. Last year, the International Energy Agency made clear that new fossil fuel projects are incompatible with the Paris agreement's goal of limiting global warming to 1.5ºC above preindustrial levels.
The legal challenge comes as U.K. residents are enduring deadly extreme heat and skyrocketing energy bills. Reliance on fossil fuels lies at the heart of both problems, Greenpeace says, and Jackdaw will only make things worse. Even U.K. officials have admitted that the project is unlikely to reduce household energy costs because Shell will sell the gas to whichever country is willing to pay the most for it.
"This Jackdaw approval is a scandal," Philip Evans, an oil and gas transition campaigner for Greenpeace U.K., said in a statement. "The government knows that burning fossil fuels drives the climate crisis, yet they're approving a new gas field in June, without proper climate checks, and declaring a national emergency over heatwaves in July."
"Meanwhile, household bills are soaring, and the government is ignoring common sense solutions—like home insulation, heat pumps, and cheap renewable power," said Evans. "We believe this is an astonishing dereliction of the government's legal duty, and we won't let it stand. So we're taking legal action to stop Jackdaw, and whenever we see the government acting unlawfully to greenlight new fossil fuels we stand ready to fight in the courts."
U.K. policymakers said last March that they would soon use a "climate compatibility checkpoint" when making decisions about new fossil fuel licenses so that future offshore oil and gas exploration could only proceed if found to align with the government's net-zero strategy.
Environmental groups were furious to learn a few months later, however, that previously licensed developments are exempt from the more rigorous test.
Jackdaw is one of 46 projects with the capacity to produce up to 2.1 billion barrels of oil equivalent over their combined lifetimes—enough to generate more than twice as much carbon dioxide pollution as the U.K. economy spews into the atmosphere each year—that could be approved between 2022 and 2025 as a result of this loophole.
Just last week, the High Court ruled that the U.K.'s net-zero plan is insufficient and unlawful, and gave the government eight months to rectify it.
"It is completely irrational for the government to approve—and heavily subsidize—a project like Jackdaw that does nothing to address the energy price crisis while contributing to climate change," activist Lauren MacDonald said Tuesday.
"Our dependence on fossil fuels is at the root of both crises, yet the government continues to try and plough ahead with new oil and gas projects," said MacDonald. "This is why we need legal action. As long as the government carries on down this path—ignoring the pressing need to insulate homes and rollout cheaper renewables—they will face backlash and legal challenges."
Scottish courts will now decide whether to grant Greenpeace permission to move ahead with its new lawsuit against the government.
That may not happen until after the Supreme Court decides whether to grant Greenpeace permission to challenge BP's permit to extract oil from the Vorlich field. The group appealed to the Supreme Court after losing its initial case against the Vorlich project last year, when Scottish courts sided with the government's argument that climate impacts are "not relevant" to fossil fuel permit decisions.
Freya Aitchison, an oil and gas campaigner at Friends of the Earth Scotland, welcomed Greenpeace's legal challenge to the government's approval of Shell's Jackdaw gas field.
"The U.K. Government must stop issuing any new fossil fuel licenses," said Aitchison, "and instead start planning for a managed phase-out of production, with a just transition for workers and communities."