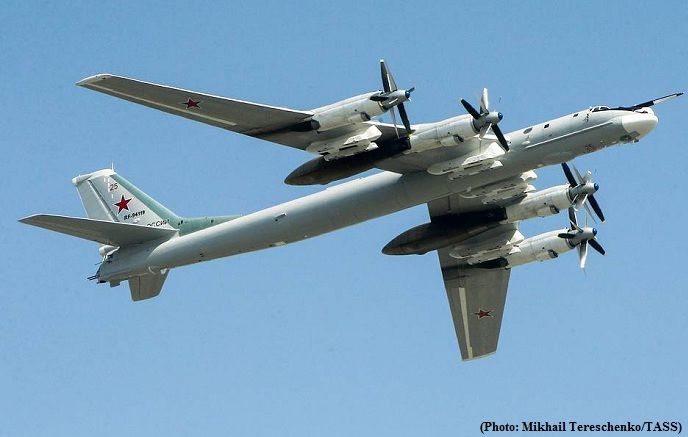 Two Russian Tu-95MS strategic bombers did not violate other countries’ borders during their scheduled flight over neutral waters of the Sea of Japan, the Russian Defense Ministry reported on Tuesday, TASS reports.

"On July 23, 2019, two Tu-95MS strategic bombers of the Russian Aerospace Forces were performing a scheduled flight in the airspace over neutral waters of the Sea of Japan," the ministry noted.

The Defense Ministry stressed that the planes did not violate other counties’ borders. "According to flight data, the Tu-95MS aircraft did not deviate from the planned route in accordance with international regulations, flying more than 25 km away from Dokdo (Takeshima) islands without violating South Korea’s airspace," it said.

The ministry said that two South Korean F-16s approached the Russian bombers near the Liancourt Rocks and "conducted unprofessional maneuvers, crossing the course of the Russian aircraft and jeopardizing their safety."

The Russian defense agency also pointed out that "The South Korean pilots did not establish communications with the crews of Tu-95MS, fired flares and then the F-16s conducted another maneuver, retreating away from the Russian planes."

"No warning shots were fired by South Korea’s fighter jets," the Defense Minsitry said, adding that, "if the Russian pilots felt a security threat, the response would follow quickly."

The ministry also emphasized that "it is not the first time that South Korean pilots have unsuccessfully tried to disrupt the Russian aviation’s maneuvers over the neutral waters of the Sea of Japan, citing a self-imposed "air defense identification zone"." However, these zones are not envisioned by the international rules and, therefore, are not recognized by Russia, which has been repeatedly communicated to the South Korean side through various channels."