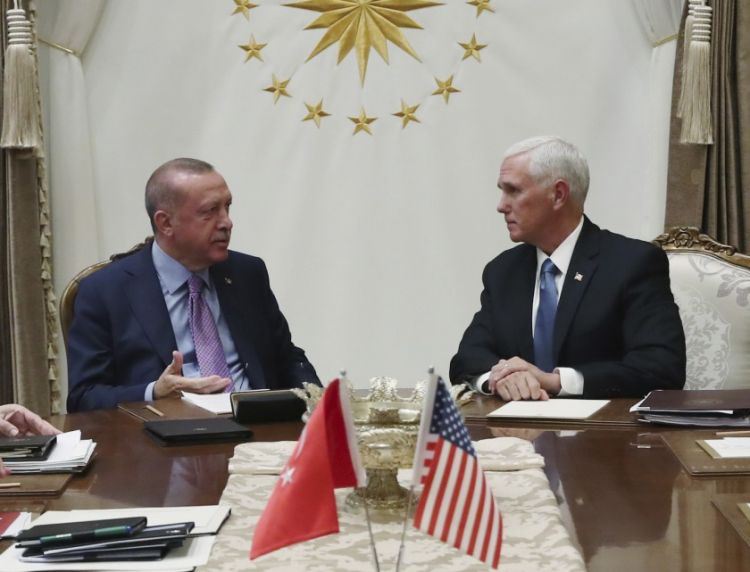 Turkey has agreed to a five-day ceasefire in Syria to let Kurdish-led forces withdraw after a high-level US delegation met with Turkish President Recep Tayyip Erdogan in Ankara, ABC News reports.

US Vice-President Mike Pence said there will be "a pause in military operations for 120 hours" and the US will help facilitate an "orderly withdrawal" of Kurdish-led troops.

The agreement essentially gives the Turks what they had sought to achieve with their military operation in the first place — the removal of the Kurdish forces from the so-called safe zone.

In addition, the deal gives Turkey relief from sanctions the administration had imposed and threatened to impose since the invasion began, meaning there will be no penalty for the operation.

Turkey's Foreign Minister Mevlut Cavusoglu said the US accepted "the importance and functionality" of a "safe zone" and says Turkish Armed Forces will control the zone under the new agreement.

Cavusoglu insisted that Turkey had agreed to a "pause" in fighting, rejecting the term ceasefire, which he said is only possible between "two legitimate sides".

"We will only halt our operation after the terrorist elements depart," Cavusoglu said.

"The pause does not mean that our soldiers and our forces will withdraw. We remain there and continue to be there."

The commander of Kurdish-led forces in Syria, Mazloum Abdi, told Kurdish TV that they will abide by the "tentative agreement".

"We will do whatever we can for the success of the ceasefire agreement," he said.

Turkish troops and Turkish-backed Syrian fighters launched their offensive against Kurdish forces in northern Syria a week ago, two days after Trump suddenly announced he was withdrawing the US from the area.