Armenia-Azerbaijan conflict must be resolved on the basis of the territorial integrity of Azerbaijan - President Ilham Aliyev
Read: 235 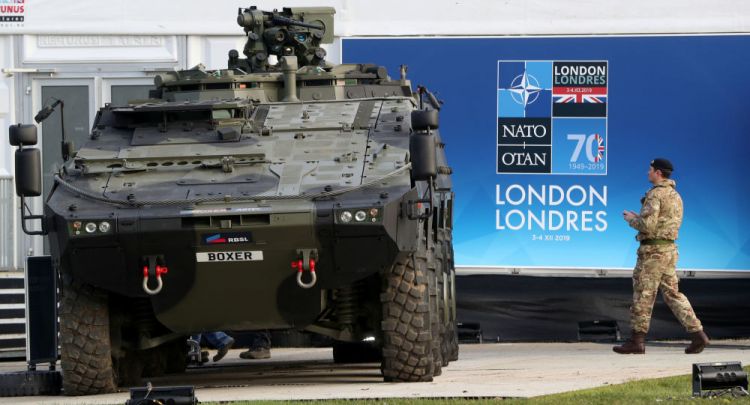 The two-day NATO summit of heads of state and government titled "NATO Engages: Innovating the Alliance", kicked off on Tuesday in London. US President Donald Trump, who has previously slammed European bloc members for not spending enough on weapons for the alliance, arrived in the United Kingdom on Monday night. Eurasia Diary reports citing Sputnik News.

The arrival of the US president was accompanied by anti-NATO rallies that engulfed the central part of London beginning early Tuesday. Protesters also chanted anti-Trump slogans. A local resident, who took to the streets of London with hundreds of demonstrators, told journalists that Trump's "racist policies" have lead to barriers and entry restrictions into the US for people from seven countries.

Anti-Trump protests were also held in London during the US president's first and second visits to the UK, in 2018 and 2019.

Some protesters also opposed UK Prime Minister Boris Johnson, who, in their opinion, has been serving the interests of the US and not Great Britain.

The protests have not spoiled the planned schedule of the NATO summit.

The summit began with a meeting between Trump and NATO Secretary-General Jens Stoltenberg. After the official introduction and exchanges of commandments about the progress done within the bloc, reporters pounded the US president with questions. One much-anticipated comment was Trump's reaction to the recent controversial statement by French President Emmanuel Macron, who had described NATO as "brain dead".

I heard that President Macron said NATO is “brain dead”, I think that’s very insulting to a lot of different forces, including the man that does a very good job in running NATO", Trump said before changing the subject to criticize France and its domestic policies.

"France is not doing well, economically, at all. They’re starting to tax other people’s products, so therefore, we go and tax them. That’s just taking place right now, on technology, and we’re doing their wines and everything else. And it’s - it’s a very tough statement to make when you have such difficulty in France. You look at what’s happened with the yellow vests, or you look at what’s going on during certain parts of their season. They’ve had a very rough year. And you just can’t go around making statements like that about NATO", Trump said.

Stoltenberg was more diplomatic in answering the question.

"NATO is active. NATO is agile. NATO is adapting. And we have just implemented the largest reinforcement of collective defense since the end of the Cold War, with high readiness of troops", he said, adding that "For the first time in our history, we have combat-ready troops in the eastern part of the Alliance".

At a joint news conference with Macron later on Tuesday, Trump seemed less combative, saying that the two countries had "done a lot of good things together". Macron and Trump then clashed over foreign Daesh fighters captured in Syria.

Trump jokingly offered them to France, saying "Would you like some nice Daesh fighters? You can take everyone you want". Macron replied that "let's be serious" and that ISIS Daeshfighters from Europe were "a tiny minority", and that the "number one priority" was to get rid of the terrorist group.

Trump objected to Macron's answer, by making it personal, saying, "This is why Macron is a great politician because that was one of the greater non-answers I have ever heard, and that's OK", adding criticism that NATO countries were paying less than the bloc's guidelines of at least 2 percent of GDP towards the alliance and warning of possible new trade measures.

"Maybe I'll deal with them from a trade standpoint", Trump said.

Macron, however, said that France - which currently spends 1.84 percent of its GDP on its military - would reach the minimum, and acknowledged that the US had "overinvested" in NATO for several decades.

One of the burning issues raised by reporters on Tuesday during the meeting of Stoltenberg and Trump was Turkey’s recent acquisition of the Russian-made S-400 air defence missiles, which has put Ankara at odds with its NATO allies.

Trump hinted at imposing possible measures against Turkey over the deal with Moscow but did not make a direct answer.

"We are looking at it now and we are talking about it now", Trump said when asked if Washington would issue sanctions on Turkey over the S-400 deal with Russia.

Stoltenberg also, dodged a direct response, and in his answer only referred again to the unity of the military alliance.

" The strength of NATO is that, despite these differences, we have proven again and again able to unite around our core task to protect and defend each other. And that’s exactly what they’re doing now. We are doing more together, North America and Europe, than have done for many decades. So the paradox is that, despite so much, as I say, some political differences, we are always able to agree and unite around our core task to stay together", Stoltenberg said.

Only Macron appeared to be less unequivocal in his answer regarding Ankara's purchase of the S-400 systems, saying Tuesday during his clash with Trump in a separate news conference that "How is it possible to be a member of the alliance  and buy things from Russia?"

Turkish President Recep Tayyip Erdogan earlier stated that while the "security umbrella" provided by NATO is very important, Turkey’s geographical location necessitates a multifaceted foreign policy approach, adding that Turkey’s cooperation with Russia and China, while important, are not an alternative to its relationship with NATO and should instead be seen as an addition to Ankara's foreign policy.

Not only Turkey’s recent acquisition of the S-400 has stirred the NATO allies, but also Ankara's recent military invasion, dubbed "Operation Peace Spring" to eradicate Kurdish forces caused global anger. The Kurdish-led Syrian Democratic Forces (SDF) have been key allies of the US-led coalition against Daesh in northern Syria and have prompted most NATO members to impose arms embargoes on Turkey, leaving it in the most isolated state within the alliance since its accession in 1952.

On Tuesday night, a four-party meeting dedicated primarily to the situation in Syria, was held ahead of Wednesday’s NATO leader's summit. Macron and Erdogan met in Downing Street with German Chancellor Angela Merkel and host, UK Prime Minister Boris Johnson.

The chancellor noted after the closed-door session that the leaders of the four countries unilaterally agreed that the fight against Daesh terrorists should be continued and completed.

We will continue contacts on how this will be done. Secondly, we support all the efforts of UN special envoy Geir Pedersen on the political process, I mean the discussion of the constitution, and we will actively do it", Merkel stressed, adding that the voluntary return of Syrian refugees to the areas where Turkey and Russia provided security could only happen with the participation of the Office of the United Nations High Commissioner for Refugees.

According to Merkel, this issue will be the topic of further discussions in February.

The idea of a quartet meeting between the four leaders was suggested by Johnson several weeks ago, following tensions between European capitals and Ankara over Turkey’s military invasion in northern Syria.

NATO allies, including France and Germany, criticized Erdogan's 'Operation Peace Spring', noting the potential for a massive humanitarian crisis and wider instability in the region.

Ankara expressed its determination to clear northern Syria both of Daesh and the YPG/PKK groups - designated by Ankara as terrorist cabals - to create a safe zone along the border for the voluntary resettlement of Syrian refugees. Turkey claims that it is currently hosting some 3.6 million Syrian refugees.

Turkey and NATO, specifically the United States, have different positions on the current situation in Syria, given that the US continues to support the PYD and other Kurdish organizations. The differences have resulted in a strained relationship between Turkey and the bloc.

During a joint news conference with Trump, the NATO secretary-general also touched upon another pressing issue - relations with the bloc's biggest neighbor, Russia, and the US withdrawal from the hallmark 1987 Intermediate-Range Nuclear Forces Treaty (INF) treaty. Stoltenberg stressed that the bloc "will strive for a better relationship with Russia".

"I strongly also, as the president Trump, believe in the importance of having dialogue with Russia. Russia is our biggest neighbor and Russia is here to stay, and we will strive for a better relationship with Russia, We need to avoid a new arms race. We need to avoid a new Cold War", Stoltenberg said, echoing earlier allegations made by Washington that Moscow violated the INF treaty.

"And therefore, we also very much believe that Russia has violated the INF Treaty, which banned all of the intermediate-range missiles in Europe. The good thing is that NATO was able to respond in a unified way. We all agreed that Russia was in violation. We all supported the US decision, because a treaty will not work if it’s only respected by one side", Stoltenberg said.

The INF accord was terminated on 2 August at the initiative of the Trump administration, after Washington formally suspended its INF obligations six months earlier. Both countries have repeatedly accused each other of violating the deal which banned any ground-launched ballistic and cruise missiles with ranges of 500 to 5,500 kilometers (310 to 3,417 miles).

In September, Russian President Vladimir Putin sent a proposal to leaders of several countries, including NATO members, to introduce a moratorium on deploying missiles banned by the INF Treaty to Europe and other regions. Later, NATO confirmed that it had received the letter but did not consider the proposal credible.

Stoltenberg said Tuesday that one way to resume talks on the restoration of the INF is finding "ways to include China", a proposal that has been repeatedly denied by Beijing.

"Arms control is something I know that the president Trump is very focused on. I really would like to see progress on arms control with Russia. But also, in one way, we will have to find ways to include China. Because, in the future, China has to be part of the arms control efforts", Stoltenberg said.