US-North Korea talks are in a stalemate - Korean FM 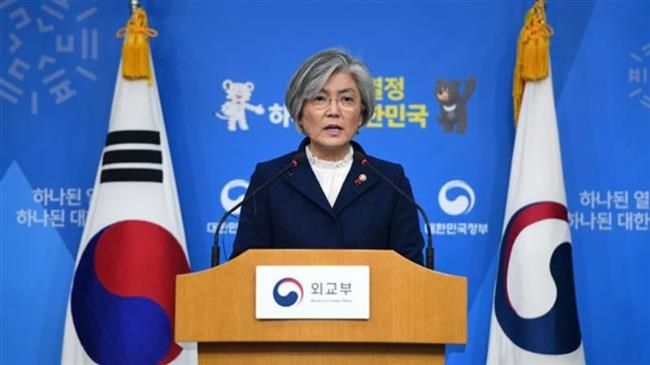 South Korea says there is no need to wait for the United States' denuclearization talks with North Korea to progress in order to proceed with inter-Korean cooperation, Eurasia Diary reports citing Press TV.

"Our basic stance is that North Korea-US talks and inter-Korean dialogue complement each other in a virtuous cycle,” South Korean Foreign Minister Kang Kyung-wha said on Wednesday.

She also said now that US-North Korea talks are in a stalemate, it is essential to revive "North Korea's engagement momentum" through inter-Korean talks.

The South Korean official made the remarks in Palo Alto, California, after meeting with her US and Japanese counterparts.

This came after South Korean President Moon Jae-in said he is making efforts to arrange a visit by North Korea’s leader Kim Jong-un to Seoul, citing a “desperate need” for both sides to improve relations, amid a deadlock in US-North Korea talks.

“In a time of deadlock in US-North Korea talks — and where we are even concerned about a step backward in inter-Korean relations — we are in desperate need of practical ways to improve inter-Korean cooperation,” he said.

He also said that “the momentum for US-North Korea talks must continue.”

Moon has been personally involved in efforts to broker diplomacy between North Korea and the US since 2018. While Kim and US President Donald Trump have met three times, talks aimed at demilitarizing the Korean Peninsula — where the US has substantial military presence — have stopped.

Moon visited Pyongyang in September 2018, when the two Korean leaders agreed to take a step closer to peace by turning the Korean Peninsula into a “land of peace without nuclear weapons and nuclear threats.”

Inter-Korean talks have, however, stalled amid a deadlock in talks between Washington and Pyongyang. The US has been refusing to offer any sanctions relief to the North even as Pyongyang has taken several unilateral steps since 2017, including demolishing a major nuclear test site.

There have also been concerns about a rise in tensions recently as North Korea has resumed its missile testing because the US missed a deadline to take action.

The North has long been under harsh sanctions by the United Nations and the US over its nuclear and missile programs.

Pyongyang has warned Seoul to steer clear of relations between the North and the United States.

Last Friday, Pyongyang said in a statement that North Korea would not return to the negotiating table with Washington solely because of the “good relations” between Kim and Trump.

However, Moon has expressed new optimism about the deadlocked talks between the United States and North Korea, citing a recent birthday wish sent to Pyongyang’s leader by the American president.