“Armenia once again demonstrates that it cannot live in peace with its neighbors” - Azerbaijani Presidential aide
Read: 725

US blocked major arms deals with Turkey, including the F-16 modernization
Read: 718

'I want to thank all the young people in this country!' - UNICEF Representative to Azerbaijan on International Youth Day - VIDEO
Read: 701

'Azerbaijan not to change position on Nagorno-Karabakh conflict' - Ilham Aliyev 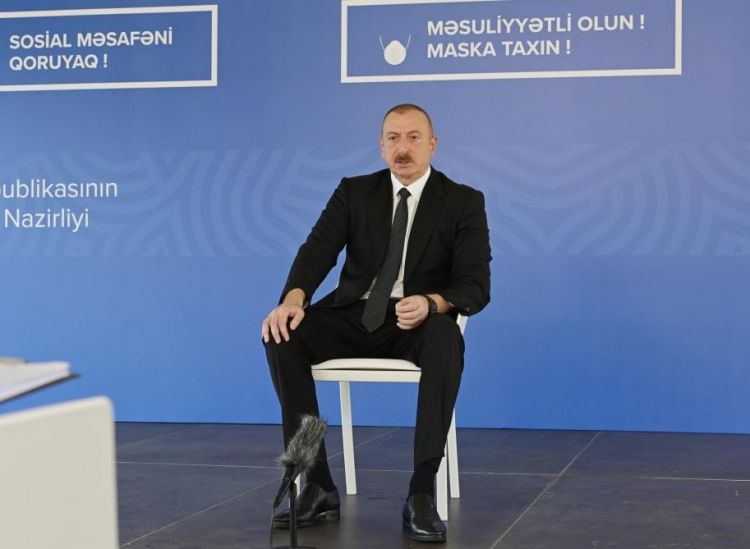 President Ilham Aliyev has said that Azerbaijan will not change its fair position over the Nagorno-Karabakh conflict, in the same speech where he also said that the negotiations mediated by the OSCE Minsk Group are not yielding results.

Aliyev made the remarks on July 6 in an interview with local TV channels, Azertag reported.

The president said that Azerbaijan expects the OSCE Minsk Group that negotiates the conflict to give “more serious and specific statements” with regards to the conflict and to respond to Armenia’s provocative actions.

“We are showing patience and trying to be constructive. However, today, in fact, the negotiation process is not going on. Video conferences between the Armenian and Azerbaijani foreign ministers have no significance. This simply shows that the Minsk Group is allegedly active… We will not carry out negotiations for the sake of imitation. We want to hold substantial talks,” Aliyev said.

The president reminded that a number of provocative actions by Armenia that undermine the negotiations have gone unanswered by the OSCE Minsk Group.

“The Armenian Prime Minister [Nikol Pashinyan] says that ‘Karabakh is Armenia… Why hasn't Minsk Group responded to this? Why cannot they say that this statement is in fact destroying the essence of the negotiations that have been shaped by the Minsk Group?

“Armenia has been seeking to change the format of negotiations for two years now and has stated that Azerbaijan must negotiate with so-called leaders of Nagorno-Karabakh. Has there been a relevant response to this? No! It is answered with abstract words and beating around the bush. But those times are over. We demand clarity,” the president said.

The president also described as provocation the inauguration in occupied Shusha of the newly-elected so-called leader of separatist regime in Nagorno-Karabakh.

“Why don’t they say that this is a provocation and Armenia will be responsible for this provocation?”

“Over the past few years, we have been urging them that a new mission must be sent. During these 10 years, Armenia has brought Armenians from Syria and other places and keeps them there by force. It [Armenia] changes the historical names of our cities and builds churches in the occupied territories,” the president said.