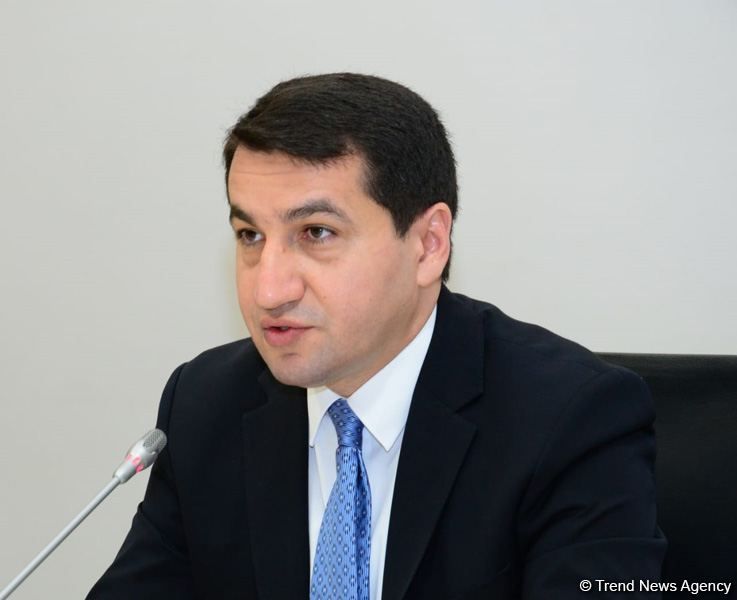 "Azerbaijan is committed to the negotiation process,” Hajiyev added. “We expect specific plans, specific proposals from the co-chairs to ensure the liberation of the Azerbaijani territories from occupation and return Azerbaijani refugees to their homes."

"We regard this as an act of aggression, an act of terror, an act of illegal use of armed forces against Azerbaijan and an attempt to violate the regime on the state border," Hajiyev said.

“This once again shows the need to strengthen actions of the OSCE Minsk Group’s co-chairs and the entire international community to resolve the Nagorno-Karabakh conflict,” assistant to Azerbaijan's president added.

"The main source of threat to the regional peace and security is the unresolved status of the Karabakh conflict,” Hajiyev added. “The recent aggravation of the situation has once again demonstrated that the Armenian side always uses such military adventures to aggravate the situation in the region, create tension and escalate the situation along the line of contact and the state border between the two countries."

Hajiyev stressed that Armenia has strategic intentions to damage the transport system, including energy system, on the East-West route.

“Moreover, the internal situation in Armenia is aggravating,” assistant to Azerbaijan's president said. “Moreover, the Armenian authorities want to divert the attention of the population from the internal problems in the country, especially as a result of their inaction in the fight against COVID-19.”

"Moreover, the Armenian side is trying to involve third parties in the conflict, including military-political alliances, where it is a permanent member,” Hajiyev said. “But the member-states of this organization, fully understanding the intentions of the Armenian side, expressed their views at different levels. Azerbaijan has friendly relations with all member-states of this organization, except Armenia."

Hajiyev also said that Azerbaijan is not pleased with the work of the OSCE Minsk Group.

"I frankly told them that their mechanism of work, consisting only of delivering messages, is ineffective,” Hajiyev added. “They receive some information from the Armenian side, bring this information to us, and then back. But there must be a clear plan for the withdrawal of the Armenian troops from the occupied Azerbaijani territories and the return of refugees to their native lands. Do not forget that the three co-chairs of the OSCE Minsk Group are permanent members of the UN Security Council.”

“I will reiterate that there is a fact of military occupation,” assistant to Azerbaijan's president said. “The co-chairs must give a political and legal assessment of this fact and on this basis we must move forward. Armenia’s illegal actions in the occupied Azerbaijani territories, including illegal resettlement, completely destroy the meaning of the negotiation process.”

“The OSCE assessment missions in 2005 and 2010 revealed many facts of illegal actions in the occupied Azerbaijani territories,” Hajiyev. “We do not see the co-chairs’ specific position regarding these issues. The UN Security Council’s four resolutions form the mandate of the co-chairs. In other words, the implementation of the requirements of these resolutions must be their primary goal."