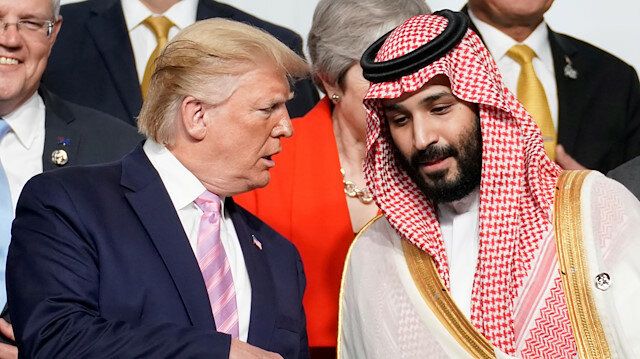 Trump told reporters at the White House that the Kingdom is among several countries he believes are on the verge of opening diplomatic ties with Tel Aviv, saying that after speaking with King Salman, he thinks the country will do so "at the right time."

The president further increased the number of nations he says are close to following in the steps of the two Arab Gulf nations "fairly rapidly" after saying earlier Tuesday that it was five or six.

"We’ll have 7 or 8 or 9. We’re going to have a lot of other countries joining us, including the big ones," he said.

During Tuesday's formal signing ceremony, Trump said the agreements would end "decades of division and conflict" in the region and usher in the "dawn of a new Middle East."

"Thanks to the courage of the leaders of these three countries, we take a major stride toward a future in which people of all faiths and backgrounds live together in peace and prosperity," Trump said, addressing hundreds of guests assembled for the event on the South Lawn of the White House.

Bahrain became the fourth Arab country to establish diplomatic relations with Israel last Friday after Egypt in 1979, Jordan in 1994 and the UAE in August.

In addition to the bilateral agreements signed between Israel and the Arab nations, all three and the US signed the mutual pact Trump and his administration call the “Abraham Accords.”

"It is now incumbent on us to work urgently and actively to bring about the lasting peace and security our peoples deserve. A just, comprehensive and enduring two-state solution to the Palestinian-Israeli conflict will be the foundation, the bedrock of such peace," he said.

The normalization deals have drawn widespread condemnation from Palestinians who say such agreements do not serve the Palestinian cause and ignore their rights.

The Palestinian Authority said any deal with Israel should be based on the 2002 Arab Peace Initiative on the principle of "land for peace" and not "peace for peace" as Israel maintains.