The desecration of Azerbaijani historical buildings and cemeteries is indicative of Armenian hatred - British Journalist
Read: 402

Design work has begun on the construction of another highway in the territories liberated from the occupation
Read: 241

Activities on provision of peacekeeping contingent of Russia are being held - Azerbaijan`s Defense Ministry - PHOTOS
Read: 240

"I am very glad to announce that, Lachin region has been liberated from occupation." - Azerbaijani President
Read: 173

Turkey calls for four-way talks on Karabakh with Russia 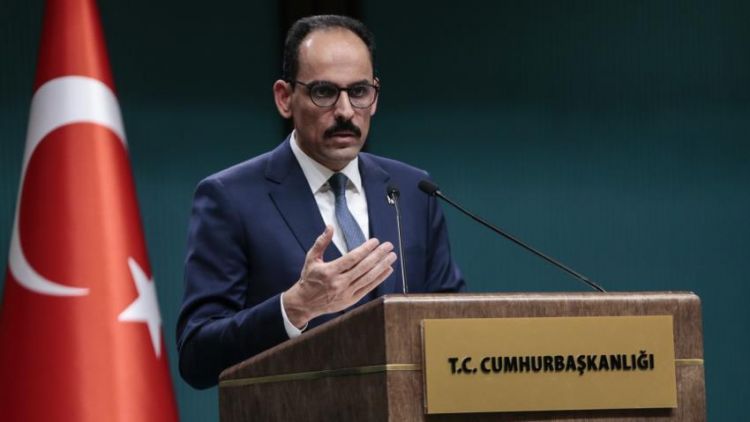 Ankara called Tuesday for four-way talks between Russia, Azerbaijan, Armenia and Turkey to try to solve a conflict in the breakaway region of Nagorno-Karabakh where a ceasefire is not being respected,  News Arab reports.

Ibrahim Kalin, head of communications of the Turkish presidency, made the call in a televised interview after more than two weeks of fighting between Azerbaijan and Armenia over the region left hundreds dead.

The Nagorno-Karabakh region of Azerbaijan, overwhelmingly populated by Armenians, has been controlled by Armenians since breaking away in what prompted a 1990s war as the Soviet Union fell.

But Azerbaijan has never hidden its desire to win back control and no state has ever recognised Nagorno-Karabakh's declaration of independence.

"Since Russia is on Armenia's side and we, Turkey, support Azerbaijan, let's meet as a foursome to discuss resolving these problems," Kalin said.

"If the Minsk Group hasn't been able to find a solution for more than 30 years, it's time to find a new mechanism," he added in reference to a grouping chaired by France, Russia and the US set up to find a resolution to the conflict.

A ceasefire negotiated in Moscow over the latest flare-up in fighting was due to come into force on Saturday, but never saw the light of day.