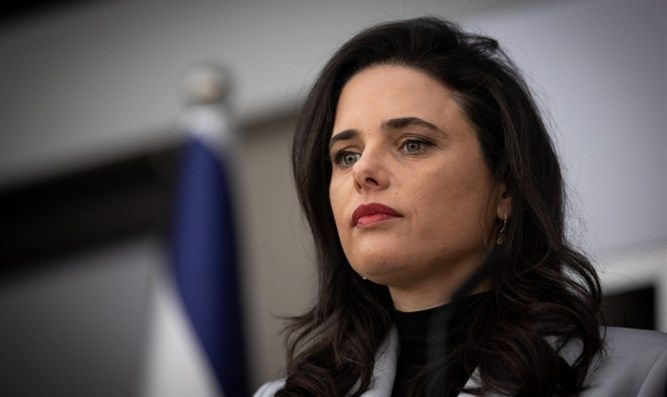 Interior Minister Ayelet Shaked and Israeli Prime Minister Naftali Bennett, both of Yamina, are divided on whether to support a law aimed at preventing former Israeli Prime Minister Benjamin Netanyahu from being able to run in the future, News 13 reported.
While Shaked staunchly opposes the law, Bennett seems to support it, and has approved Justice Minister Gideon Sa'ar's (New Hope) bid to advance the bill.
Earlier this year, Yamina officials said they would not support "personal" bills, including those aimed at preventing Netanyahu from serving as prime minister in the future.
Last year, Shaked said: "The left-wing camp that has the rule of law in its throat is trying to change the rules of the game...through personal and retroactive legislation, is a violation of the foundation of Israeli democracy."
The bill, unveiled by Sa'ar in an interview with Yediot Aharonot on Friday, would prevent a criminal defendant from being tapped to form a government. During the interview, Sa'ar said he intends to submit the bill during the Knesset's winter session, and that it would apply beginning from the elections for the 25th Knesset.
When asked if he had coordinated the bill with Bennett, Sa'ar responded: "Assume that I would not start this process without being coordinated with the Prime Minister."
"I note the norms that apply in the State of Israel on the issue: Mayors who are indicted are suspended. And I note that mayors are elected in direct elections and yet the legislature agreed by a broad consensus that they should be suspended if they are charged with crimes," he added.
"This is a general norm that will apply to everyone. I have held consultations in the Ministry of Justice and it is clear to me that the proposal we will bring will stand all the constitutional tests, and I intend to promote this proposal."