US President Biden to speak with Russia's Putin on Tuesday - ednews.net

US President Biden to speak with Russia's Putin on Tuesday

The US said it has evidence of a planned Russian military offensive in Ukraine, as Moscow aims to stop its neighbor from joining NATO. US President Joe Biden and Russia's Vladimir Putin are set to meet for virtual talks. 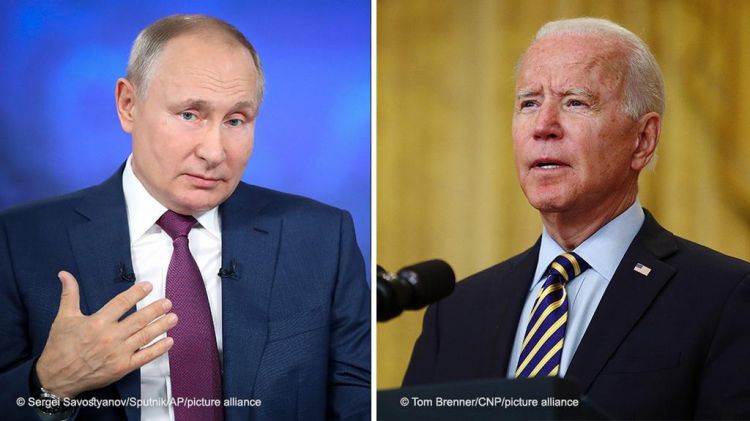 US President Joe Biden will discuss Moscow's buildup of troops on the Ukrainian border with Russian President Vladimir Putin in an online meeting on Tuesday, sources on both sides have confirmed.
Kremlin spokesman Dmitry Peskov and a US source told the Reuters news agency on Saturday that the video call between the two leaders will bring up Ukraine and progress on bilateral agreements made between the two countries at a Geneva summit in June.
What subjects are on the agenda?
Biden will reaffirm the sovereignty and territorial integrity of Ukraine at the online meeting, the US source told Reuters.
The White House has declined to comment on the scheduling of the video call.
The Reuters source also said the online meeting will deal with strategic stability, cyberattacks and regional issues.
"The conversation will indeed take place on Tuesday," Kremlin spokesman Dmitry Peskov told Reuters. "Bilateral relations, of course Ukraine and the realization of the agreements reached in Geneva are the main [items] on the agenda," he said.
If the talks go ahead, it would be the first conversation between Biden and Putin since July 9 after they met face-to-face in Geneva in June.
Bilateral agreements to crack down on hackers could also be among the topics discussed in Tuesday's call.
Russia hopes to pressure the US into not allowing Ukraine into being part of the NATO alliance. But various US and NATO diplomats told The Associated Press that such demands would be a non-starter.
How serious is the Ukraine situation?
US media outlets including The Washington Post and AP have reported that Russia is planning a military offensive against Ukraine in early 2022.
"We're aware of Russia's actions for a long time and my expectation is we're going to have a long discussion with Putin," Biden said on Friday. "I don't accept anybody's red lines," he added.
The US president said he and his advisers were trying to find ways to stop Putin from invading Ukraine.
"What I am doing is putting together what I believe to be, will be, the most comprehensive and meaningful set of initiatives to make it very, very difficult for Mr. Putin to go ahead and do what people are worried he may do,'' Biden said.
US Secretary of State Antony Blinken warned Russian Foreign Minister Sergey Lavrov earlier this week that US and European allies would impose "severe costs and consequences on Russia if it takes further aggressive action against Ukraine."
While Ukraine has said that 94,300 Russian troops are at its border, Moscow has instead accused Kyiv of amassing its own troops.
Relations between the US and Russia are at one of their lowest points in decades, worsening since Russia's 2014 annexation of the Crimean Peninsula from Ukraine, Moscow's 2015 support for the Syrian government and accusations of meddling in US elections.
In 2021, relations soured even further when Biden accused Russia of not cracking down on cyberattacks launched from Russia which have hurt US interests.