Bennett found Putin to be ‘rational’ during meeting - ednews.net

Bennett found Putin to be ‘rational’ during meeting

Russian officials said to know where Zelensky hiding, but refraining from attacking him; US reportedly worried Putin using Bennett to improve his image 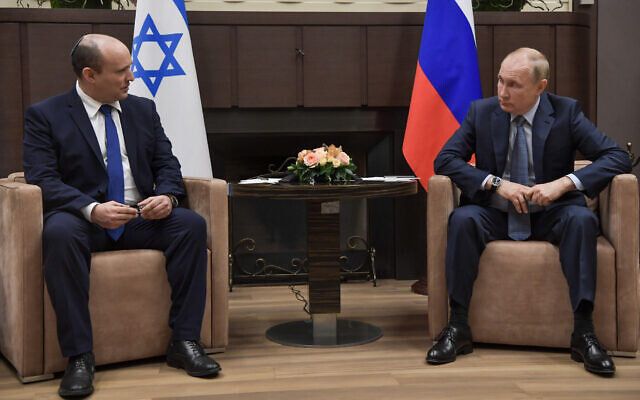 Prime Minister Naftali Bennett reportedly came away from his meeting with Russian President Vladimir Putin with the impression that he was in a rational mindset, bucking Western assessments that the Russian leader may have become unhinged.
A source close to Bennett was quoted by Channel 13 news Sunday night as saying that Putin was “not conspiracy theorizing or irrational, nor is he suffering from rage attacks.”
On Saturday, Bennett flew to Moscow to meet with Putin, becoming the first Western leader to sit down with the Russian leader since he invaded Ukraine on February 24. After spending three hours with Putin, Bennett flew straight to Berlin and met with German Chancellor Olaf Scholz, just days after the pair had met in Jerusalem.
Few details were provided on the content of either meeting.
Bennett’s trip was seen as an effort to further develop his emerging role as a mediator between the sides, capitalizing on Israel’s positive relations with both Kyiv and Moscow.
On Sunday, Bennett spoke again with Putin, as well as with Scholz and with French President Emmanuel Macron.
Bennett told ministers during the cabinet meeting on Sunday that he did not present an Israeli mediation plan, and instead is conveying messages between the sides, the Channel 13 report said.
The network, citing Bennett’s office, said the effort is being led by the prime minister and Scholz.
A diplomatic source quoted in the report said that Bennett was being cautious with Putin, due to the Russian leader “not being interested in a ceasefire or humanitarian corridors.”
A US source quoted by Channel 13 said that American officials are worried Putin is using Bennett in order to regain international legitimacy.
However, sources close to Bennett also told Channel 12 news that the US encouraged him to meet Putin, seeking to take advantage of Israel’s good relations with both sides to end the fighting. Bennett reportedly spoke with White House National Security Adviser Jake Sullivan on Friday ahead of the meeting, and received the go-ahead.
Those same sources said that Putin made it clear to Bennett that he is unwilling to end hostilities until Ukraine demilitarizes, saying that Moscow’s position is: “until there is dialogue, hostilities [will continue].”
According to the Kan public broadcaster, Bennett, during Sunday’s cabinet meeting, did not share many details of his discussion with the ministers, but reassured them it was “fully” coordinated with the Americans.
Kan reported that also in attendance at the Moscow meeting were Ukrainian-born Israeli Housing Minister Ze’ev Elkin, who served as translator to Bennett, and another translator for Putin.
The Prime Minister’s Office declined to say why there was no photograph of the two leaders on Saturday. Channel 13 reported that, officially, Bennett, who is religious, did not want to pose for a picture on Shabbat. However, it was speculated that the decision was also due to the optics of being in the same frame with the reviled Russian leader.
According to the Channel 12 report, Russia conveyed to Israel via diplomatic channels that it is deliberately not targeting Ukrainian President Volodymyr Zelensky, even though it knows where he is, reportedly with the aim of capturing him alive.
The Ukrainian leader was said to survive at least three assassination attempts last week.
According to the London newspaper The Times, mercenaries from the Wagner Group, a security company under the control of Yevgeny Prigozhin, a key ally of Putin, and Chechen special forces were sent to kill Zelensky.
The report claimed Ukraine was tipped off about the plans by anti-war members of Russia’s Federal Security Service.
The Times said Wagner Group sustained losses in their assassination attempts, with a source close to the group saying it is “eerie” how well informed Zelensky’s security team is.
Chechen assassins were “eliminated” on the outskirts of Kyiv during one of the attempts on Saturday, the report said.