Change of PM could herald ‘new start’ in Brussels-London relationship 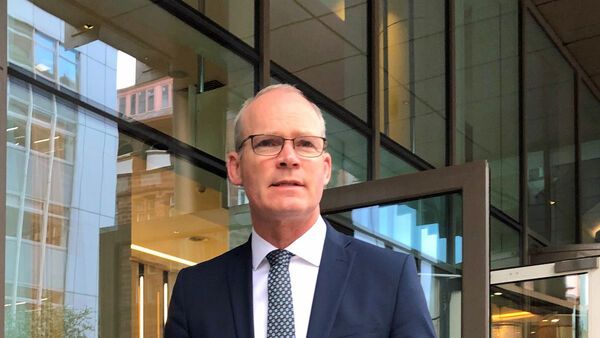 The EU is hopeful a change in UK prime minister will herald a “new start” in relations between Brussels and London, the Foreign Affairs Minister has said.
Simon Coveney said he does not have a preference between Liz Truss or Rishi Sunak in the Conservative leadership contest.
However, he expressed hope that whoever succeeds Boris Johnson steps away from the contentious move to override Brexit’s Northern Ireland Protocol by way of domestic legislation at Westminster.
Mr Coveney was speaking in Belfast ahead of meetings with local politicians to discuss the ongoing power-sharing impasse at Stormont triggered by the DUP’s refusal to reenter a devolved executive in protest at the Irish Sea trading arrangements.
“The leadership contest within the Conservative Party is a matter for the Conservative Party,” he said.
“We’ll work with whoever the new leader is, whoever the new prime minister is. Of course, we hope that the new prime minister won’t pursue a strategy of breaking international law and breaking their word to Ireland and the EU.”
Mr Coveney said the EU is waiting to see what the approach of the next British prime minister will be before deciding its next move in response to the controversial Northern Ireland Protocol Bill. I think there is a sense in Brussels now that they want to wait for a new prime minister to be in office in number 10 Downing Street,” he said.
“And I think there is a certainly a willingness to try to work towards a new start, if you like, in relations between the British government and the EU. And certainly that’s the case from Dublin. I mean, we would like to see the change in Conservative Party leadership and the change in the prime minister’s office as an opportunity to try and resolve some of these outstanding issues in a different way. Because, you know, it’s no secret that the relationship between the British and Irish governments has not been good in recent years and that’s because the British Government has decided to move away from partnership and co-operation, which in many ways has been the foundation of the success of the peace agreements, which will be 25 years old this year. And it’s a real worry for us, if I’m honest, that the British Government over the last number of years has moved away from that partnership approach to try to make politics in Northern Ireland easier for people in terms of finding solutions and compromises on difficult issues.”
Simon Coveney had meetings scheduled with Sinn Féin, the Alliance Party, the UUP and SDLP on Thursday.
He said it had not been possible to arrange a meeting with DUP leader Jeffrey Donaldson as he was in London.
“We looked for a meeting with the DUP, just like we looked for a meeting with the DUP the last time I was here,” he said.
Mr Coveney said people should not “read too much into” the fact a meeting with the DUP had not been possible.
The DUP said “diary issues” prevented a meeting on Thursday but that they hope one can be arranged soon.