The move is likely to spark an angry reaction from North Korea, which denounced US House Speaker Nancy Pelosi as the "worst destroyer of international peace" when she visited the DMZ in August. 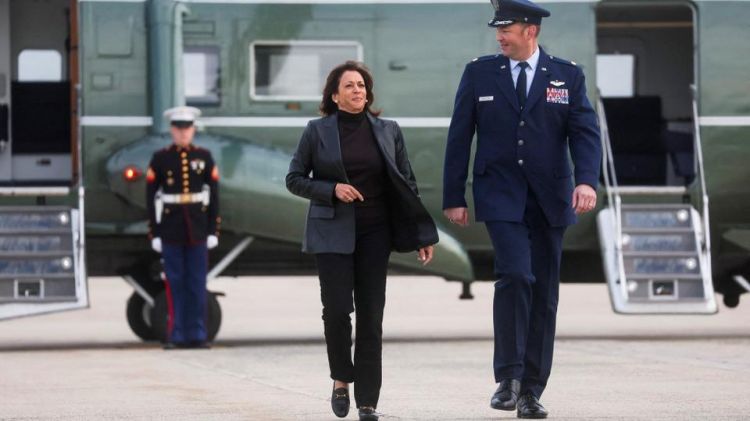 US Vice President Kamala Harris will visit the heavily fortified Demilitarised Zone of Korea (DMZ) on a trip to South Korea later this week, the White House has said.
Harris, who is currently in Tokyo to attend the state funeral of assassinated former Japanese prime minister Shinzo Abe, will go to the DMZ on Thursday, a White House official said on Tuesday.
Harris's visit to the DMZ will "underscore... the United States' commitment to stand beside (South Korea) in the face of any threats posed by" North Korea, the US official said.
Harris will "reflect on the shared sacrifice" of US and Korean soldiers killed in the Korean War, which ended with a ceasefire that split the peninsula nearly 70 years ago in 1953, the official said.
The move is likely to spark an angry reaction from North Korea, which denounced US House Speaker Nancy Pelosi as the "worst destroyer of international peace" when she visited the DMZ in August.
On Monday, Pyongyang warned that South Korea and the United States risked triggering war after the allies launched their first combined naval exercise near the peninsula in five years.
Harris arrived in Japan on Monday and met Prime Minister Fumio Kishida ahead of Abe's funeral on Tuesday.
South Korean Prime Minister Han Duck-soo also held talks with Harris in Tokyo on Tuesday and said the DMZ visit would offer "very symbolic demonstrations of your strong commitments to the security and peace to the Korean Peninsula".
Joint military drills
North Korea has conducted a record-breaking blitz of weapons tests this year, including firing an intercontinental ballistic missile at full range for the first time since 2017.
Washington and Seoul officials have repeatedly warned that North Korea is preparing to carry out what would be its seventh nuclear test — a move that the United States warned would provoke a "swift and forceful" response.
South Korea's President Yoon Suk-yeol, who took office in May, has vowed to beef up joint military drills with the United States after years of failed diplomacy with North Korea under his predecessor.
On Monday, South Korea's navy said the joint naval exercise "was prepared to demonstrate the strong will of the South Korea-US alliance to respond to North Korean provocations".