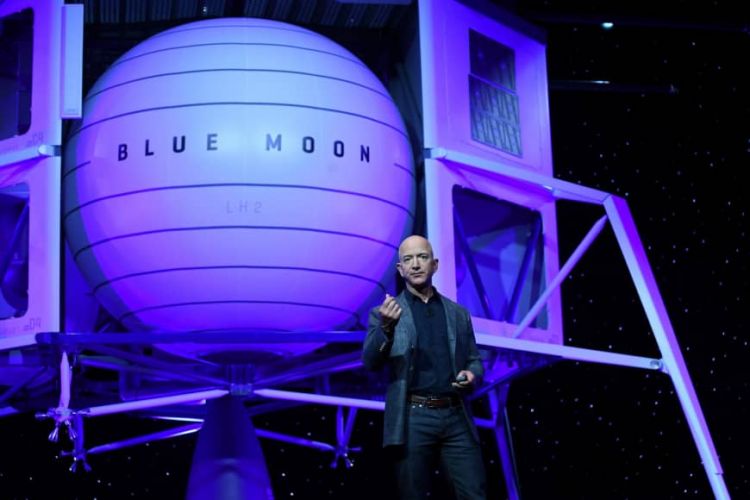 Richest person in the world, Jeff Bezos, yesterday pitched NASA a team mostly made up of the usual suspects to build a lunar lander for the agency's ambitious 2024 boots-on-Moon goal, The Register reports.

Speaking at the International Astronautical Congress in Washington, Bezos announced the "national team", of which his Blue Origin would be the prime contractor (naturally). The members consist of Lockheed Martin for the Ascent Stage, Northrop Grumman for the Transfer Element and Draper providing the guidance and navigation systems.

"We could not ask for better partners," intoned the billionaire, which is fair enough. After all, elements of all the companies in the team-up worked on the Apollo program back in the day (although those engineers will have long been put out to pasture.)

The Transfer Element will guide the stack from lunar orbit to close to the Moon, from whence the Descent Element will conduct a powered descent. Lockheed Martin's ascent module will then send the freshly minted Moonwalkers back into space.

Blue Origin will also be building the descent element of the lander, which uses the company's BE-7 engine. The powerplant, Bezos said, is fuelled by liquid hydrogen and oxygen and as well being "highly throttleable" and developing 10,000 pounds of thrust.

The BE-7, of course, has yet to actually leave the test stand. Bezos told the audience that to date, the company had managed 13 minutes of test time, including a three-minute continuous firing.

That same engine, Bezos added, would be used by Northrop Grumman in the transfer element of the lunar lander stack.

Bezos unveiled the Blue Moon lander back in May and the announcement of the National Team is an indicator that it will take more than one company to meet the 2024 goal. It will also reassure those within NASA nervous about flinging cash at a company that has yet to even make Earth orbit, let alone do anything in deep space. And NASA has lots of experience in giving money to Lockheed Martin and Northrop Grumman after all.

Grumman, of course, built the original Apollo Lunar Module back in NASA's glory days while Draper provided the guidance systems for the Moon missions.

These days, Northrop Grumman provides NASA with ISS cargo services and is working on both the boosters for the eternally-delayed Space Launch System and the habitat for the agency's Lunar Gateway.

Draper has continued to work on precision guidance, although there is a delightful hole to tumble down in researching the Apollo guidance units, particularly efforts to fire up the old things once more. Naturally, the hand-woven circuitry of the Apollo era won't feature this time around.

NASA is due to select two contractor teams in late 2020 to actually build the lander, having asked for proposals (and deleted certain reusability requirements in the rush to 2024). ®