ExoMars will be drilling 1.7 meters to pull its samples from below the surface of Mars | Eurasia Diary - ednews.net

ExoMars will be drilling 1.7 meters to pull its samples from below the surface of Mars 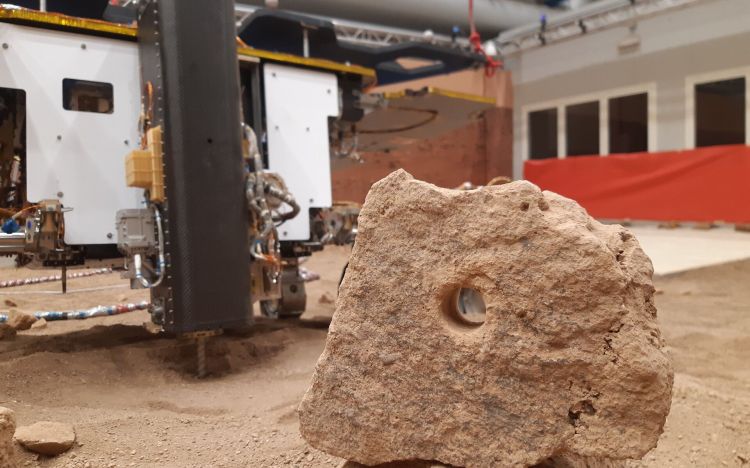 In about a year (Sept. 20th, 2021), the Rosalind Franklin rover will depart for Mars. As the latest mission in the ESA’s and Roscosmos’ ExoMars program, Rosalind Franklin will join the small army of orbiters, landers, and rovers that are working to characterize the Martian atmosphere and environment. A key aspect of the rover’s mission will involve drilling into the Martian soil and rock and obtaining samples from deep beneath the surface. To prepare for drilling operations on Mars, the ESA, Italian space agency (ASI), and their commercial partners have been conducting tests with a replica – aka. the Ground Test Model (GTM). Recently, the test model completed its first round of sample collection, known as the Mars Terrain Simulation (MTS). The rover drilled into hard stone and extracted samples from 1.7 meters (5.5 feet) beneath the surface in a record-breaking feat. The MTS operations are being held at the Rover Operations Control Center (ROCC), located on the Aerospace Logistics Technology Engineering Company (ALTEC) premises in Turin, Italy.

These dry runs are basically a dress rehearsal for the surface operations conducted by the real rover, which is being developed in parallel in preparation for launch next year. To test how Rosalind Franklin will fare in on the Red Planet, the GTM has been drilling into a well filled with various rocks and soil layers. This takes place on a dedicated platform tilted at seven degrees to simulate the sample collection process on realistic, variable terrain. The first sample was obtained from a block of cement clay of medium solidity and was shaped like a pellet measuring about 2 cm long and 1 cm in diameter (0.787 x 0.39 inches). Once collected, Rosalind Franklin’s drill retains the sample with a shutter that prevents it from falling out during retrieval. Once the drill is completely retracted, the sample is dropped into a drawer in the front of the rover, which closes and deposits the sample into a crushing station.

The resulting powder is then distributed to ovens and containers inside designed to perform scientific analysis. By drilling to a depth of 1.7 meters, the GTM established a new record for sample collection, as the deepest any mission has drilled on Mars to date is 7 cm (2.75 inches). The Rosalind Franklin rover is designed to drill deep up to 2 meters (6.5 ft) beneath the Martian surface, the purpose of which is to gain access to any well-preserved organic material that may have migrated there from 4 billion years ago and after. At that time, Mars was a warmer, wetter place where surface conditions were similar to what is believed to have existed on Earth around the same time. With the success of missions like the Spirit, Opportunity, Curiosity, and Perseverance rovers – which found compelling evidence for flowing water and organics on the surface – scientists have been eager to get a peek at the subsurface environment to see if this is where Mars’ water and possibly life could have retreated to.

The long-awaited successful soil collection from a hard stone and its delivery to the laboratory inside the rover represents a major milestone for the ExoMars 2022 mission and Mars exploration in general. As ExoMars project scientist Jorge Vago described: “The reliable acquisition of deep samples is key for ExoMars’ main science objective: to investigate the chemical composition —and possible signs of life— of soil that has not been subjected to damaging ionizing radiation,” The drill was developed by the aerospace company Leonardo, which also contributed to creating the ROCC alongside the ESA, ASI, and Thales Alenia Space (the prime contractor for the ExoMars 2022 mission). Relying on an automated assembly of mechanisms, the Rosalind Franklin drill works on rotation by fitting tools and extension robs to form a “drill string” that allows it to drill to a depth of up to 2 m (6.5 ft). The drill also has a two-degree of freedom positioner that allows it to deposit samples at the right angle into the rover laboratory. It can penetrate the ground at 60 rotations per minute (depending on the consistency of the soil) and dig into solid clay materials and sandy rock at a rate of 0.3 and 30 mm (0.012 to 1.18 inches) per minute, respectively.

Said ExoMars rover team leader Pietro Baglioni, “The design and construction of the drill has been so complex that this first deep drilling is an extraordinary achievement for the team.” Another major challenge comes from having to simulate Martian conditions during the tests accurately. To do this, the GMT must be suspended from the ceiling on a dedicated gravity compensation device to recreate the effect of Martian gravity, which is about 38% that of Earth (0.38 g). But gravity alone does not represent all of the environmental challenges a robotic rover will have to contend with once it’s on the surface of Mars.