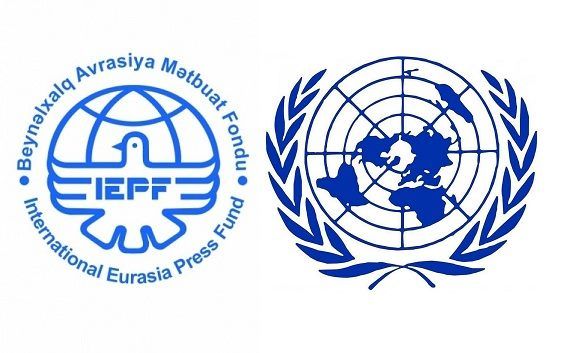 The written statement of the International Eurasia Press Fund (IEPF), which enjoys a General Consultative status with United Nations Economic and Social Council (ECOSOC), will be presented during the seventh session of the UN High-level Political Forum on Sustainable Development (HLPF 2019) in New York.

HLPF 2019 will address the theme, 'Empowering people and ensuring inclusiveness and equality'. It will conduct an in-depth review of SDG 4 (quality education), SDG 8 (decent work and economic growth), SDG 10 (reduced inequalities), SDG 13 (climate action) and SDG 16 (peace, justice and strong institutions), in addition to SDG 17 (partnerships for the Goals) which is reviewed each year.

Eurasia Diary reports that the report is currently publicly available on the official website of the ECOSOC Civil Society Network. It highlights the importance of mutual work for achievement of the UN Sustainable Development Goals. The Statement also reflects the current situation in the world when wars, ethnic and religious conflicts, territorial disputes and terrorist attacks, economic crisis and environmental disasters have a direct influence on equal and sustainable development of the society.

Publicly available Statement provides the detailed consequences of the Armenia-Azerbaijan Nagorno-Karabakh conflict which resulted in the occupation of 20% of Azerbaijani lands – the territories of Nagorno-Karabakh and 7 adjacent regions as well as in the appearance of 1.2 million refugees and IDPs living in Azerbaijan. Moreover, the Statement provides the real facts about the destroyed properties, sites and ecological disaster on the occupied territories. In conclusion, it calls for a global partnership to be created to act on bringing more attention to fair conflicts’ resolution, liberation of the occupied territories, creation of equal conditions to all refugees and IDPs in all possible means, creation of sustainable development and peaceful environment.

The full text of the published Statement is provided here:

“The topic identified by the for the 2019 session of the Economic and Social Council “Empowering people and ensuring inclusiveness and equality” is a crucial point of the international discourse on implementing the 2030 Agenda for Sustainable Development for measuring of progress achieved in this direction and setting the priorities for finding solutions in addressing the specific needs of people left behind in the development process. In 2015, with the adoption of the Sustainable Development Goals, the world agreed that the time has come to completely solve the problem of inequality, which results in unequal and unsustainable development, which in turn creates instability. Almost 4 years have passed since 2030 Agenda for Sustainable Development was adopted and it is time for an honest look at the economic and social inequality within and between states led to the emergence of modern threats to the sustainable development of our planet.

International Eurasia Press Fund (IEPF) – international Non-Governmental Organization established in 1992, with the logo “Peace at Home, Peace in the Country, Peace in the World” and with the long term objective to support global peacemaking, equal and sustainable development. Since the time of establishment, the IEPF has spread its geographical activity on Post-Soviet, Asian and European states; managed good collaboration with the UN entities, the US State Department, the European Commission, the International Press Institute, the International Peace Bureau, different foreign diplomatic missions and international organizations situated in Azerbaijan, governmental and non-governmental structures. In partnership, the IEPF work on the realization of different humanitarian, social, media and education projects aimed to support the vulnerable parts of the population, especially women and children, landmine victims, refugees, and IDPs from the war-affected regions, ensure their integration into society, empowerment and equality. Presently, IEPF works in five key directions: Media & Civil Society Development; Peace-making & Conflict Resolution; Community Development; Refugees/IDPs Issues; and Education.

We believe that every single person should contribute to the achievement of Sustainable Development Goals. Over the millions of people around the world, including the political leaders, researchers, civil society groups and youth worked on sustainable development agenda and on the determination of 17 global goals to make sure that all people will work together on their achievement for sustainable future.

It is imperative to address the issue of inequality, including unequal rights of refugees and IDPs. Today is the highest historical period of devastating effects of wars, ethnic and religious conflicts, territorial disputes and terrorist attacks, economic crisis and environmental disasters which have a direct influence on equal and sustainable development of the society. Conflicts in more than 50 countries around the world, as well as serious disasters, economic and ecological risks led by the wars, forced more than 65 million people to leave their homes. In most cases, the rights of these people to life, to education, to work are being violated that leave them behind in the development process.

Azerbaijan is one of the countries, which faced ethnic cleansing and suffered from the occupation in a result of which, today, there are more than 1.2 million refugees and IDPs living in Azerbaijan. Only in89, with the help of the Soviet army, almost 300,000 Azerbaijanis were deported from Armenia. Considering the fact that today Azerbaijani population reached 10 million people, the number of refugees and IDPs for 1 single person is much bigger in comparison with other countries. During 1988-1993 the Armenian forces have occupied the 20% of Azerbaijani lands – the territories of Nagorno-Karabakh and 7 adjacent regions. In the occupied territories of Azerbaijan more than 900 settlements and 150,000 apartments with a total area of 9.1 million m2, 4,366 social and cultural facilities, 7,000 public buildings, 2,389 industrial and agricultural facilities, 1,025 schools, 855 kindergartens, 4 sanatorium-resort complexes, 798 medical institutions, 927 libraries, 1,510 cultural institutions, 598 communication facilities, more than 40,000 museum exhibits were destroyed. The right to property, right to live in peaceful and sustainable conditions of more than a million people was seriously violated. The devastation of the occupied regions, damaging agriculture, infrastructure, industry, and historic treasures must be stopped as fast as possible to restore the peaceful re-establishment of law and order. The international community has to pay more attention to this situation which has been continuing for almost 30 years. Despite four resolutions of the UN Security Council (822, 853, 874 and 884) adopted during the conflict, which require the immediate and unconditional withdrawal of Armenian Armed Forces from Azerbaijani territories, Armenia ignores all resolutions that is a key point for settlement of the Armenia-Azerbaijan Nagorno-Karabakh conflict and accordingly, further sustainable and equal development of the South Caucasus region.

The comprehensive commitment of Member States to “no one is forgotten” requires us to combat inequality and to clearly identify and eliminate all forms of discrimination to make sure that the voice of every single person is heard. It is important to make sure that all people have equal access to basic rights, including the right to study and work. The role of civil society and Non-Governmental Organizations is crucial in this case. Promotion of equal access should give primacy to needs-based vocational education in non-traditional occupations, particularly to girls, women, refugees, IDPs and disabled people. The strategies to be adopted for affecting this have to keep in view the cultural, geographical and ecological variations as also the problems relating to poverty and ignorance. Moreover, it is necessary to work on the projects aimed to support youth development and its integration into the decision-making process. In addition, we need to have stronger institutions for the protection of the right to equality of refugees and IDPs. There should not be discrimination between old and new appearing refugees and/or IDPs. The rights of these people have to be protected on the national and international level.

In conclusion, the International Eurasia Press Fund would like to encourage that this session of the Economic and Social Council “Empowering people and ensuring inclusiveness and equality” is a good platform to brainstorm the key points and generate specific proposals based on one single approach on the role and involvement of the civil society in promoting equality. In such a period of instability and inequality in the world, established with the slogan of "Peace at Home, Peace in the Country, Peace in th old" the International Eurasia Press Fund, agrees that the time has come to solve, if not completely, but mostly, the problem of inequality, which interconnected with economic and social as well as political sustainable development. It is time to look honestly at the reasons of inequality and work together on the promotion of the role of civil society in partnership with the governments to make people who are living in the most difficult circumstances be the voice of truth in the world. Therefore, we call the international community, UN entities, Governmental and Non-Governmental organizations, representatives of civil society and media structures for a global partnership to be created to act on bringing more attention to fair conflicts’ resolution, liberation of the occupied territories, creation of equal conditions to all refugees and IDPs in all possible means, creation of sustainable development and peaceful environment.”

The seventh session of the UN High-level Political Forum on Sustainable Development (HLPF 2019) will take place under the auspices of the UN Economic and Social Council (ECOSOC). The session will take place from Tuesday, 9 July, to Monday, 15 July 2019, followed by a three-day ministerial meeting convening from Tuesday, 16 July, to Thursday, 18 July 2019, held jointly with ECOSOC's annual high-level segment.