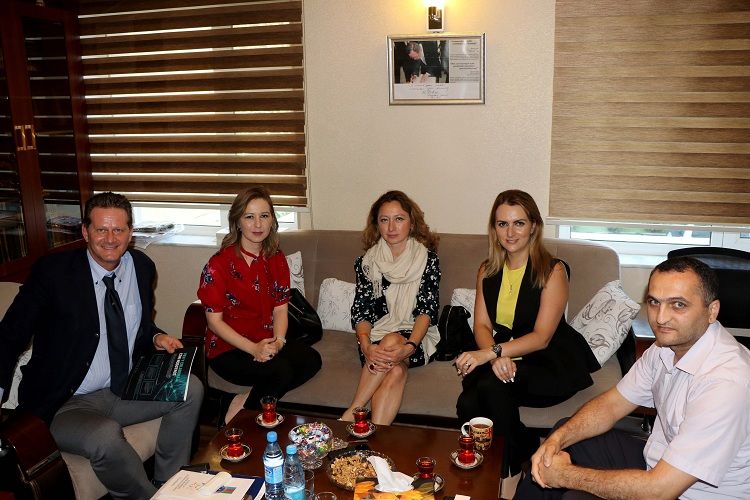 The meeting was attended by the Assistant to the IEPF president Anastasia Lavrina and Aqil Aslan, Editor-in-Chief of the information analytical gateway Eurasia Diary, founded by the IEPF.

A.Lavrina welcomed the guests and spoke about the key work directions of the organizations. She also informed the guests about a number of socio-economic and humanitarian projects, which are being implemented in partnership with local and foreign partners, including foreign diplomatic missions and UN entities. Aqil Aslan explained the position of Eurasia Diary. Eurasia Diary was established as the initiation of the IEPF for disseminating of the objective information about the existing conflicts, including Armenia-Azerbaijan Nagorno-Karabakh conflict and promotion of an idea about peace.

Salvatore Moccia said that the purpose of his visit to Azerbaijan is promoting technological innovations in financial sectors. In the modern time, the world can't be imagined without technology and it is used in many sectors also financial sectors. S. Moccia is planning to attend several conferences in Azerbaijan for explaining the advantages of using financial technologies.

"Azerbaijan has a huge opportunity to implement financial technologies. The existence of the energy industry will help Azerbaijan to set up financial technologies which will ease the financial operations for businessmen and consumers. I really believe that these conferences we are organizing will be a big impact on promoting this technology here. Because we have made these promotions in other countries which have resulted positively. It is not an expensive platform in terms of money but very helpful for making life comfortable," Dr Moccia stated. Selin Shenocak emphasized that Azerbaijan plays an important role in the development of the economy in Eurasia and these conferences can be very useful.