Lucrative botticelle business goes on despite pledges by succession of mayors 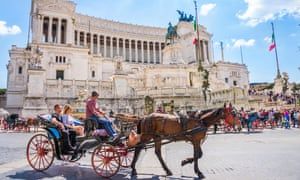 Italian leaders have been urged to stop “the unjustified exploitation of animals” after a horse collapsed as it pulled tourists through the narrow streets of Rome.
The horse fell on the Via dei Condotti, a busy shopping street in the city centre, on 17 October after slipping on a manhole cover. The driver of the carriage allegedly ignored pleas from onlookers to have the horse checked by a veterinarian, choosing instead to continue the tour towards the nearby Spanish Steps once the animal was back on its feet.
“Subjecting animals to inhumane labour in the name of an anachronistic tradition is animal abuse,” Rinaldo Sidoli, a spokesman for the animal and environmental activist group, Alleanza Popolare Ecologista, said. “Horses in Rome are forced, against their will, to tow extremely heavy loads (the carriage alone weighs 800kg) on slippery pavements and amid noisy traffic. We ask the mayor, Virginia Raggi, to stop this unjustified exploitation of animals.”
ENPA, the national agency for animal protection, said that other horses had fallen on the same manhole. “To make this story even more disturbing is the behaviour of the driver,” the agency added. “It was as if nothing had happened, and so the true health of the horse remains a mystery.”
Rome’s horse-drawn carriages, known as botticelle, are a lucrative business, with tour operators charging as much as €350 for horses to cart four people around key monuments of the Italian capital for two hours.
A succession of mayors has pledged to ban the practice, with the city’s current leader, Virginia Raggi, making it a campaign promise ahead of her election in June 2016. A year later, the local authorities announced a plan for the horses, who are kept in stables in the Testaccio, to be moved away from the streets to work in the city’s parks instead. The idea of replacing the carriages with electric vehicles was also mooted. The measure, which included a ban on horse-drawn carriages circulating between June and September and when the temperature exceeds 30C, was later passed by a parliamentary transport committee in Italy’s former government. Raggi, from the Five Star Movement, the party ruling nationally with the centre-left Democratic party, reiterated the plan over social media in July while feting Rome as “a leader in safeguarding and protecting animals”. But nothing has changed.
ENPA called on politicians to ban the outdated practice completely: “During the election campaign the mayor promised to save the horses from the chaotic streets of Rome – we ask national politicians to take charge of this emergency.”
There have been other cases of horses collapsing or dying on Rome’s streets. One, called Legoli, died in June 2008 after being hit by a car while towing a carriage along a road by the Tiber River. A few months later, an 18-year-old horse, called Birillo, died while working near the Colosseum. Birillo fell after being startled by the noise of a passing truck. Another collapsed by the Spanish Steps in the summer of 2012, with the driver attempting to beat the animal back to work before being stopped by police. A law was later passed forbidding the horse-drawn carriages from doing their rounds if the temperature is above 40C.
Thirty-two people have licences to drive the horse-drawn carriages; under Raggi’s plans no new licences would be issued, with the drivers given the option to apply for taxi permits. Drivers have often openly brawled with animal rights activists over a practice that has long been criticised for its cruelty. About 80 horses are still working.
“The sight of a horse falling to the ground left many tourists appalled,” added Sidoli. “The disgraceful spectacle was yet another blow to the image of Italy. The time has come for parliament to listen to the growing sensitivity of Italians towards animal rights.”