She heard of Karabakh conflict through words of Umud Mirzayev 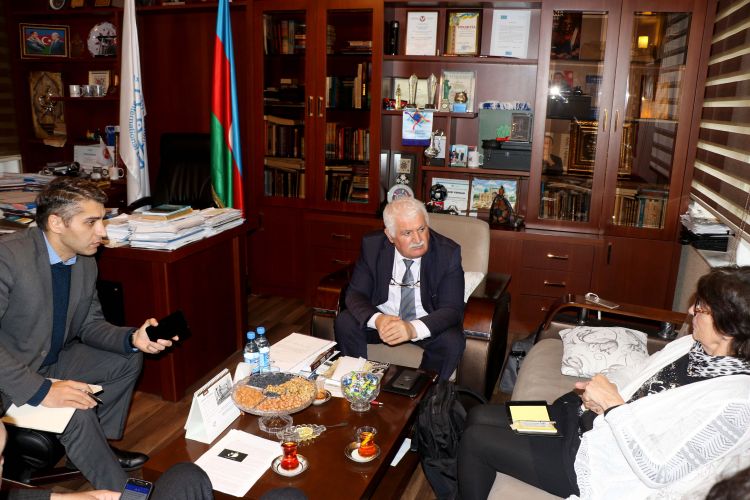 Helene Tremblay, a world researcher, author, photographer and an internationally acclaimed inspirational keynote speaker who has lived with more than 140 families in 111 countries emphasised the above notes after her 25-day journey in Azerbaijan. She is the author of 15 books depicting an intimate portrait of daily life worldwide. Her books are published and distributed in Canada, USA, Australia and France.

Helene introduces the world’s residents to one another by living with, taking pictures, and writing about families who represent the conditions of living of the majority in every country. From sunrise to sunset, hour by hour, the author takes part in the thousand little events that weave the human life in the world.  She took us 3 decades back talking to Eurasia Diary her long and interesting adventure. Helene said she was a TV producer in an advertising agency in Paris until she had the idea of realising this project. She knew it was a very difficult task for which she had to travel the world picturing and penning down every piece of moment in human life, and introduce Humanity to Humanity. Finally after many hard works Helene’s project received support from agencies such as CIDA , UNICEF, UNFPA and UNESCO and companies such as Olympus and the Body Shop International.

This time, Helene was a visitor of the International Eurasia Press Fund in the capital city of Baku, Azerbaijan. Here, in the editorial she was warmly welcomed by the staff and the President of the International Eurasia Press Fund Umud Mirzayev receiving her in his office. Helene was full of impressions throughout her journey in Azerbaijan, one of the fascinating countries in the Caucasus as she stressed herself.

“I would never imagine there was such a lovely and fascinating place like Caucasus in the world. I was born in Abitibi, a secular province of northern Quebec in Canada. My home was close to forest, the location of sparse populations. I was eager to integrate people, learn about lifestyles, explore and dive deep in cultures and traditions of communities. From the first day of my visit in Azerbaijan I was admired by calmness and peaceful atmosphere in this country. I would especially want to thank to Umud Mirzayev and his friendly team for supporting me to accommodate in Baku.”

Helene’s story of adventure didn’t come over in Baku. She told of her extended journey that had taken her to Ganja, the second biggest city in the north western Azerbaijan. Her biggest plan was to choose out a relevant family from among five of which members should have had state-based work with minimum wage. She simply goes, knocks at the door and asks to be guest of a family living for few days with them. Here the hospitality charms Helene during her stay in one of Azerbaijani families in Ganja. “Indeed, I loved all members of this family. Mother, father and their two wonderful daughters and the amazing grand-mother. It was an honour to share their daily lives and sit every day at their table.  You know, I am now travelling with seven jars of  home-made jam made of berries. For me, this gift,  tells of Azerbaijani hospitality better than words.

As the two daughters worked, and the wife worked half days as teacher, this family had the privilege of helping each other with four salaries.  That allowed them to move from a flat to a house so they could take in the 92 year-old grand mother to care for her. Children in the family also drew my attention. I had a long chat with the two young daughters and we could share of their future plans. One was 24 and another 27 years old.  Their father admitted of his worry that his daughter would ever marry.  The oldest loves her career and all she learns and the youngest one conscious of all she has to learn and loving to grow and better herself in every way.  Both have had many discussions with their parents about seeing life further then marriage and someday their mother approves and someday tradition brings back questions when she wonders of her daughter’s future and the changes in the society.”

When Helene was talking to us in the office she described Azerbaijani community in mainly positive character. She explained the peace and unity in popultion and in particular families because of existing secularism in the country. She added people are more tolerant and friendly like in her town in Canada. However she touched some problems asking the reason, which hamper the young generation to choose their own lives for their future development. The IEPF President Umud Mirzayev provided the answer underlining the conflict of Karabakh, which is the main reason even paralysing the development of the generations. “Azerbaijan could have been the best developed country in the world if the Karabakh conflict had found its solution. Despite the 4 resolutions issued by UN on the peaceful solution of this conflict we and especially our young generation still suffer from this problem. I am the live witness of the conflict and the habitant of those war-torn regions. In my devastated house there are militants of Armenia, who have occupied 20 per cent of our territory since almost 30 years. The children of those internally displaced persons close to the frontline go to schools in the hardest conditions. There 60 pupils sitting in a small classroom with a half a metre distance from the whiteboard…can you imagine how those children get educated hoping for a bright future..? I am sure, if Azerbaijan regained its occupied territories, our children would have more opportunities to think of being future professors, academicians, doctors and athletes.

By the way, I mentioned the word of athlete. I want to tell you a short story of a young boy who was preparing to play in a football match in a tournament. He was going to select a jersey number to join a team and suddenly utters the number 23. His father asked him why he chose that number, he told he would answer him later. The match was over and his team won. He took the first place and turned his face to his father answering the question he asked him before the game. He said – “you know why I chose this number? Because, this number reminded me the occupation of Aghdam, Fuzuli and Jabrail on July and August 23, which is also same of my number.”

This filled eyes of everyone there and it demonstrated the courage of that young boy burning with passion and hope for the victory to return his occupied homeland.”