Seventeen Armenians arrested in Belgium for hate crimes against Azerbaijanis 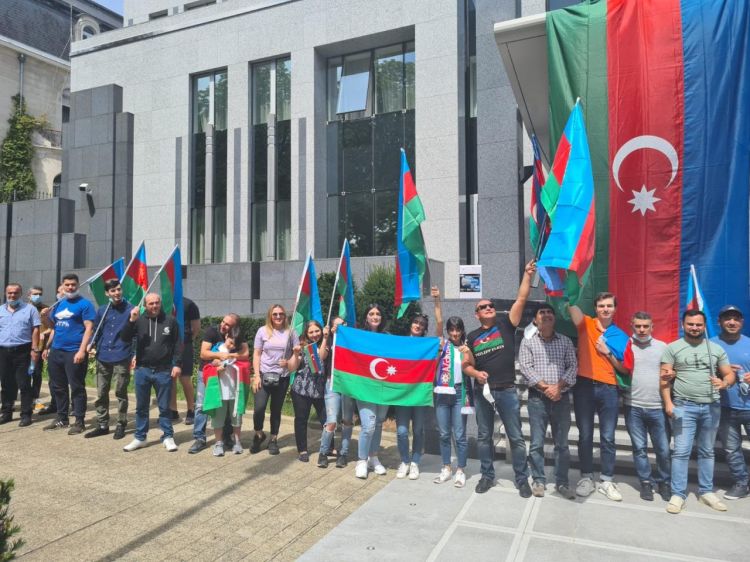 Armenia has recently stepped up attacks and provocations against Azerbaijan’s diplomatic missions and civilians in countries where Armenians are densely populated. After violent attack in Los Angeles that left seven Azerbaijanis injured, this times Azerbaijanis in Belgium became the target of Armenian radical groups, EDNews.net reports citing APA.

On July 22, police in Belgium arrested seventeen Armenians for staging hate crimes and provocative acts against Azerbaijanis, the embassy said in a statement on July 24.

The arrests come after violent attack on Azerbaijanis outside of the Azerbaijani Embassy in Belgium on July 22 where Azerbaijan’s diplomatic mission and community members came under attack.

Armenians protests outside of the embassy, threw stones, sharp cutting tools and explosives at Azerbaijanis holding a rival demonstration outside of the embassy. Six members of the Azerbaijani Diaspora, as well as the correspondent of the European bureau of "REAL TV" Khatira Sardargizi were injured in the attack and hospitalized. Employees of the diplomatic mission were injured, the mission's administrative building was destroyed, its ornaments were broken, the private car of an Azerbaijani community member was damaged.  Armenians even attempted to attack the area where the diplomats’ family members reside.

Overall, ten people (one with heavy injuries) received different injuries during the protests, four were hospitalized.

Apart from attacking diplomatic missions, groups of Armenians also targeted individual Azerbaijanis. A video circulated in social media on July 23 showed a group of up to ten Armenians violently beating an Azerbaijani man covered in blood and verbally insulting him. The graphic video had been recorded by an Armenian national living in Belgium and shared in his Instagram account. The video was shared by Armenian social media users who commended the attack and called for more violence against Azerbaijanis.

Two other graphic videos of two Azerbaijanis being beaten and insulted by Armenian gangs in Belgium were also shared in the social media.

The Belgian police, which coordinated the incidents with a large number of land and air forces, prevented further escalation of the provocations, drove Armenian radicals away from the area with water cannons.

In general, detailed reports and protocols on the events were prepared and an official appeal was sent to the Ministry of Foreign Affairs of the Kingdom of Belgium and other relevant agencies, demanding the punishment of Armenian criminals.

“Extremely aggressive provocations, acts of aggression and vandalism are being committed by radical Armenian forces against members of the peaceful Azerbaijani community abroad protesting against Armenia's military provocations,” Azerbaijan’s Embassy said in a statement issued on July 23.

The embassy highlighted that after failing on the background of military clashes launched by Armenian forces in the direction of Tovuz on the Azerbaijani-Armenian border on July 12, Armenian Diaspora is attempting to carry out terrorist attacks against the diplomatic missions of Azerbaijan in a number of countries.

It should be noted that on July 21, a group of Azerbaijanis came under the attack of thousands of Armenian nationalists during a protest held outside of the building of the Consulate General of Azerbaijan. As a result, seven Azerbaijanis, including a woman, were injured and four of them were hospitalized. In addition, a police officer of Los-Angeles Police Department trying to protect the Azerbaijani woman from Armenian attackers received the head injury.

Moreover, bottles, stones, glass fragments and explosives were also thrown at Azerbaijani citizens in Poland, the Netherlands and France. Attempts were made to overturn the cars and damage the embassy buildings.