Azerbaijani language and culture center to be opened at Pakistani University NUML - ednews.net 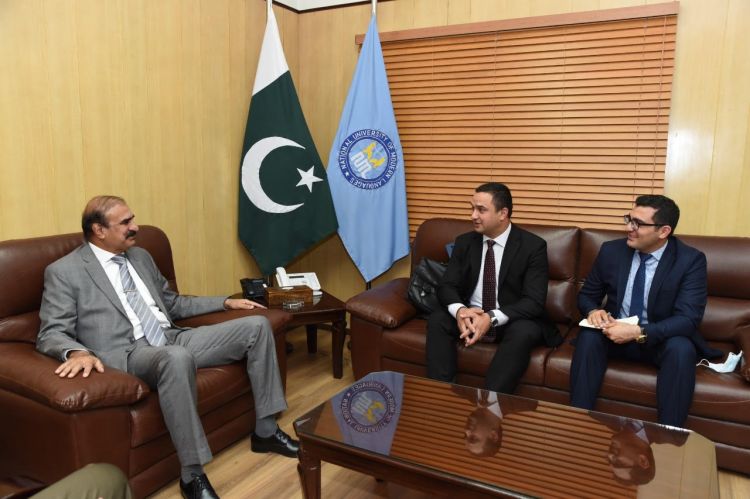 Anar Rahimov thanked the rector for the warm reception. Talking about the high-level relations between Pakistan and Azerbaijan, he specially stressed the political and moral support provided to Azerbaijan by brotherly Pakistan during the Patriotic War.Mr. Rahimov informed the rector about the newly inaugurated Pakistan Cultural Center at the Azerbaijan University of Languages and noted that with the initiative of Rector Kamal Abdulla, they intend to open the Azerbaijani Language and Culture Center at NUML, as well as to teach Azerbaijani Multiculturalism subject in brotherly Pakistan from next term.Anar Rahimov stressed that the implementation of such projects will further deepen relations between the two countries, strengthen people to people contacts, as well as contribute to the development of scientific and educational ties between Azerbaijan and Pakistan.

Major General (Retd) Muhammad Jaffar, Rector of the University of Modern Languages of Pakistan spoke about the existing fraternal relations between Azerbaijan and Pakistan, told that the two countries have always supported each other and congratulated the Government and people of Azerbaijan on victory in the Patriotic War which resulted with the liberation of Azerbaijani territories from Armenian occupation.He welcomed the intention of opening of the Azerbaijani Language and Culture Center and teaching of Azerbaijani Multiculturalism subject at NUML from the next term, and expressed his confidence that the university administration would provide all necessary assistance for the inaugurationof the center.