Azerbaijan's victory will pave the way for stability and prosperity in the entire Caucasus region - Ahmad Abdo Tarabik - VIDEO - ednews.net

China landed on the moon and found water in dirt and rocks
Read: 336

EDNews.net reports that the presentation was attended by ambassadors of Arab-speaking countries to Azerbaijan, MPs, political scientists, prominent orientalists and media representatives.

Ahmed Abdo Tarabik attended the event in a video conference format. He said that thanks to the far-sighted policy of President Ilham Aliyev, Azerbaijan's victory in the Patriotic War resonated around the world.

The Egyptian scientist presented his book "Iron Fist-Karabakh War 2020" to the participants of the event. He said that it was a continuation of the book "The road to peace in the Karabakh-Caucasus" published in 2016. In the first book, he wrote about the irrigation of Azerbaijani lands, including Karabakh, with the blood and tears of martyrs. He had personally presented the book to President Ilham Aliyev during his visit to Azerbaijan in 2017.

"In the book, I noted that despite the fact that the Azerbaijani side was technically ready for war, I was totally against the shed of blood, and I called for the peaceful return of the territories occupied by Armenia.

Like everyone, I was unaware of the day the war began, but my words came true and Azerbaijan liberated its lands. The rest of my mission was to record the course of the war in my book "Iron Fist-Karabakh 2020".

I hope my book will be on top of the shelves of Arabic libraries, as well as translated into many languages, such as Azerbaijani, Turkish and English. I hope this victory, which I mentioned in my book, will be a light for the new generation," added by Ahmad Abdo Tarabik. 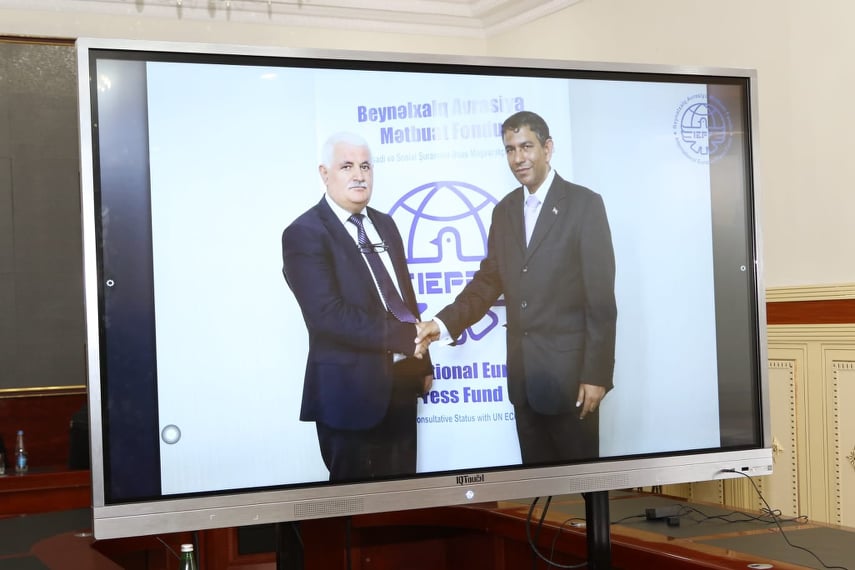 The researcher thanked IEPF President Umud Mirzayev for his hard work and support in writing the book.

"We have already met Umud Mirzayev, who has dedicated a long part of his life to the development of the country and has extensive contacts with humanitarian organisations of many countries and authorised representatives of the CIS countries. This acquaintance and friendship led to the publication of such a book.

I hope by writing my book "Iron Fist-Karabakh 2020", I was able to make a small contribution to the perpetuation of the great victory of Azerbaijan in 44 days. I believe that this victory will pave the way for stability and prosperity in Azerbaijan and the Islamic world, as well as in the entire Caucasus region! ”