A memorandum signed between Al Jazeera and the International Eurasia Press Fund - ednews.net 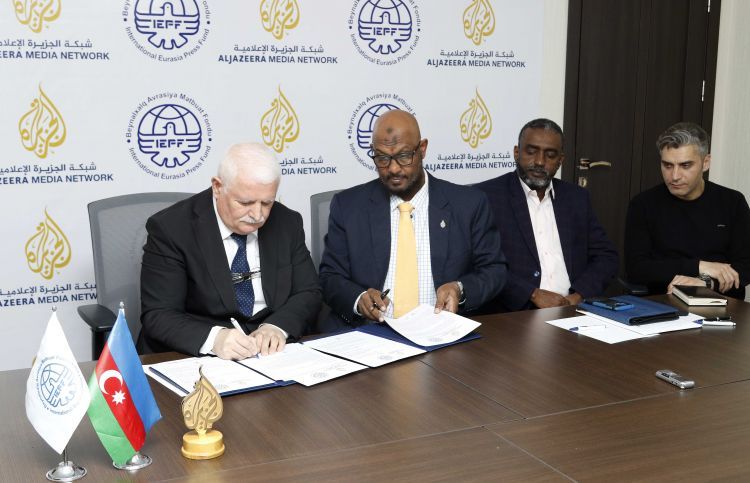 Al Jazeera Media Network will cooperate with the International Eurasia Press Fund.
According to Eurasia Diary, on March 30, a memorundam of understanding was signed at the head office of the International Eurasia Press Fund, which formalizes long-term relations between the two partner organizations.
The ceremony was attended by representatives of Al Jazeera Media Network, Director of the Center for Public Freedoms and Human Rights Sami Al-Hajj and Head of Partnerships and Research Hassan Elmogummer.
The cooperation agreement approved by the leadership of Al Jazeera Media Network was signed by official representative Sami Al Hajj and IEPF President Umud Mirzayev. The IEPF Supervisory Board Chairman Akif Musayev and IEPF Representative at the UN Office in Geneva Osman Al Hajj also particpated in the event.
The relevant document will formalize and further expand the close ties between the two organizations, which have lasted for almost 10 years. This cooperation will make the world-famous Al Jazeera accessible to all Azerbaijani media through the International Eurasia Press Fund.
According to the agreement, Azerbaijani journalists will have the opportunity to practice in Al Jazeera, participate in various international events and implement journalist exchange programs. It is also planned to hold a series of trainings as a continuation of two major professional and safety trainings previously held for Azerbaijani journalists by professional trainers of Al Jazeera Media Network.
The two partner organizations have always shown solidarity in ensuring freedom of speech and protection of human rights, and have always contributed to the organization of joint events and the preparation of mutual videos. The IEPF also supports the broadcast of reports, articles and articles prepared by Al Jazeera's staff from the region to meet the news needs of the Arabic and English-speaking audience in the region.
Prepared by the professional team of Al Jazeera TV with the organizational support of the IEPF, 5 documentaries, each lasting 25 minutes, which presented the mysterious beauty of Azerbaijan to the world, won the sympathy of a large audience. Al Jazeera Media Network has always been the most reliable reference point of the news with its objectivity and impartial position after the First Karabakh War, the April 2016 battles, as well as after the Second Karabakh War.