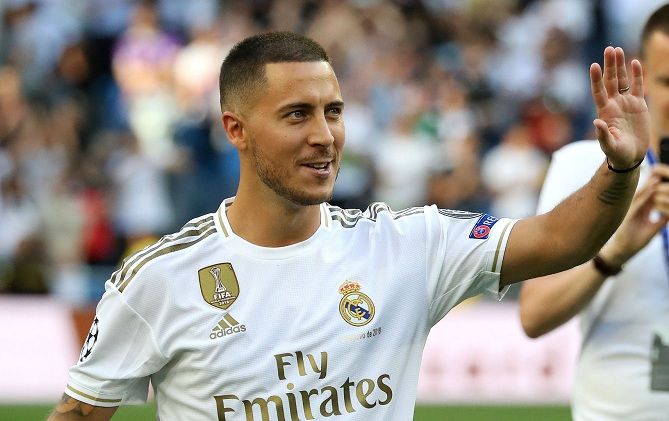 The former Chelsea man was officially unveiled on Thursday at Santiago Bernabeu and has expressed his desire to establish himself at Los Blancos, Goal reports.

Newly signed Real Madrid forward Eden Hazard has stressed that he is not a “Galactico” yet – but hopes to help the club back to their glory days.

The Belgium international was officially unveiled as the latest arrival at Santiago Bernabeu today following a successful medical that sealed his move from Chelsea.

Exiting the Blues, with whom he has played for since 2012, for a reported initial fee of £88.5m (€100m/$112m) , the 28-year-old is believed to be the most expensive transfer ever conducted by the club, exceeding that of Gareth Bale.

Hazard has played down assumptions that he considers himself a member of the elite group of players who bear the moniker, such as Ballon d’Or holder Luka Modric, but professed a desire in his first press conference at the club to scale such heights.

“I'm not a "Galactico", not yet, [though] I hope to be one day,” the Belgian stated. “I'm Eden Hazard and everything I've done is in the past [does not count].

“Here I start from scratch. I don't consider myself a "Galactico", but a very good player.

“It's true Real Madrid [has] won a lot of titles and [that] the last year hasn't been so good. That happens in football.

“I hope to start a new cycle with the players who have won so much, that's what I'm here for.”

Madrid will head to the United States for the International Champions Cup next month when they face Bayern Munich, Arsenal and Atletico Madrid in Houston, Landover and East Rutherford respectively.