Weather alert continues in India, Bangladesh and Nepal. The torrential rains occur every year and force millions of people to flee their homes abandoning everything. 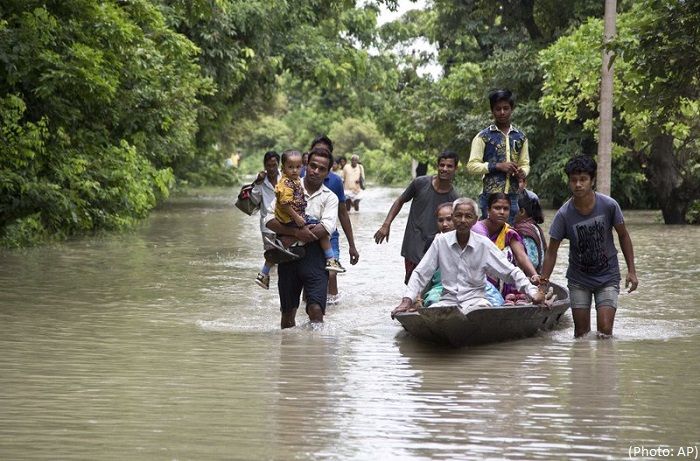 The first wave of monsoon rains in South Asia have left at least 130 dead and 4.3 million displaced in the states of northern India, Nepal and Bangladesh.  The violent rains have devastated entire territories, flooded fields and caused the collapse of houses.

In India the worst effected states are Assam and Bihar, two extremely poor and rural regions.  The authorities report that in Assam torrential rains have been falling for 10 days and have forced millions of people to flee their homes.  The television channels broadcast images of railways and roads submerged in Bihar, and the population trying to wade through the mud, with the water that reaches their chest and the few possesions snatched from their home carried on their head.

The floods in Assam are due to the raising of the water level of the Brahmaputra river, which flows from the peaks of the Himalayas to Bangladesh.  According to the authorities, the Kaziranga National Park, inhabited by the rare specimen of unicorn rhino, is almost entirely underwater.

Torrential rains are typical of the monsoon storm season and cause mass evacuations and victims every year.  In 2017, the worst year of recent times, the toll was at least 800 dead and millions of hectares of crop lost.

In Nepal at the moment there are 64 dead and 31 missing.  Most of the victims were caused by landslides that dragged the houses away.  In the country the worst count of human casualties was in 2008, when the Kosi river broke its banks and diverted its course, devastating the territory and killing 500 people.

Finally, 190,000 people were evacuated in Bangladesh.  In the district of Cox’s Bazar, which houses more than 700 thousand Rohingya refugees who fled from persecution in neighboring Myanmar, about 100 thousand people have been transferred.  In recent days, throughout the country, 29 deaths have been counted and the meteorological authorities report that in the next 48 hours atmospheric conditions will worsen.  The administrations are distributing rice, medicine and canned food.  Hundreds of schools have been closed as a precaution.