2750 tonnes of ammonium nitrate stored at Beirut warehouse at centre of explosion
Read: 715

Azerbaijani MoD - Armenians created a fake Twitter account using the name of the Ministry of Defense of Azerbaijan
Read: 573

Kashmir Bleeds - Conflict can trigger another war between India and Pakistan
Read: 571 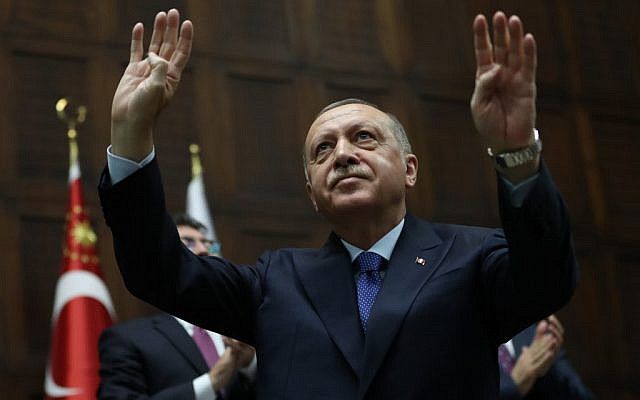 Turkish President Recep Tayyip Erdogan pledged to continue a military operation into Syria ahead of a visit Thursday by a high-level U.S. delegation led by Vice President Mike Pence and Secretary of State Mike Pompeo who are intent on pushing Turkey to agree to a cease-fire.
Thursday’s talks in Ankara were reportedly arranged during a phone call between Erdogan and U.S. President Donald Trump.
Trump is calling for an immediate cease-fire and offering mediation to bring an end to Turkey’s military operation, which began last week.
Ankara launched operation “Peace Spring” against the YPG Syrian Kurdish militia, which Ankara considers terrorists linked to a decades-long insurgency inside Turkey. But the militia was a crucial ally in Washington’s war against the Islamic State.
No talking to 'terror organization'
However, Erdogan is dismissing Washington’s efforts to end the operation.
“There are some leaders who are trying to mediate,” Erdogan said in an address to parliament. “There has never been any such thing in the history of the Turkish Republic as the state sitting at the same table with a terror organization,” he added.
Speaking to reporters after his parliamentary address, Erdogan ruled out meeting Pence, “I am standing tall. I will not meet them,” he said. “I will speak when Trump comes.”
Erdogan did quickly reverse his stance.
“He does plan to meet the US delegation led by @VP tomorrow [Thursday]” tweeted Erdogan’s head of communications, Fahrettin Altun.
However, Thursday’s meeting is being predicted to be difficult.
“I don’t see what we can expect tangibly from the visit, just more of the same unfortunately,” said former senior Turkish diplomat Aydin Selcen, who served in Washington.
“Mr. Erdogan appears not to expect much from this visit,” he added. “But Moscow and Washington are lined up against this military operation, and extreme U.S. sanctions are on the way.”
Trump sanctions implemented Monday over the Turkish operation were brushed aside by Erdogan and the financial markets as symbolic. But the United States Congress is threatening to introduce far more severe measures if Turkey continues with its Syrian operation.