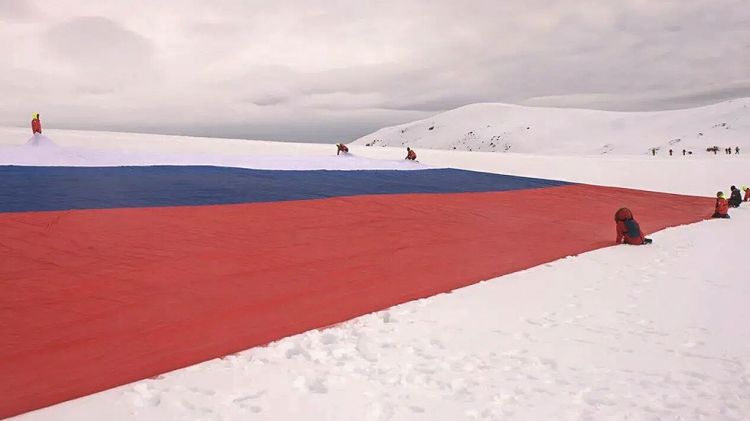 The Night Wolves bikers, known for their association with the Russian president, have joined with another patriotic group to bring a huge national flag to Antarctica – a mission that saw them sheltering at an abandoned polar base, Eurasia Diary reports citing Russia Today.

Photos show the massive Russian tricolor, measuring a whopping 1,423 square meters unfurled, amid the desolate Antarctic desert. The tiny human figurines seen in the shots are members of the notorious motorcycle club and the ‘All Worlds’ patriotic organization.

Russian media learned of the mission’s success on Saturday from Yury Volkov, the head of All Worlds. “There are 10 people who came to Antarctica, it took us several days to get there,” Volkov told RIA Novosti. He added that they’d had to spend a night on the frozen shore and, for that, they’d sought shelter “at an abandoned base.”

This is only the latest remote place that the huge flag has been to, as the group has brought it to such sites as Mount Elbrus – the highest point of Europe in Russia’s Caucasus – and to Lake Baikal in Siberia (the world’s deepest) as well as to the Crimean Peninsula and Moscow. Their most ambitious stunt to date saw the flag unfurled at the North Pole ice sheet.

The Night Wolves, once known in Russia as an outlaw motorcycle club, have taken on a patriotic slant a few years ago, joining President Vladimir Putin on a number of celebratory occasions and initiating much-publicized European rides timed with V-Day and deemed provocative in the West. The group’s members have been banned by several Western countries and placed on a US sanction list.