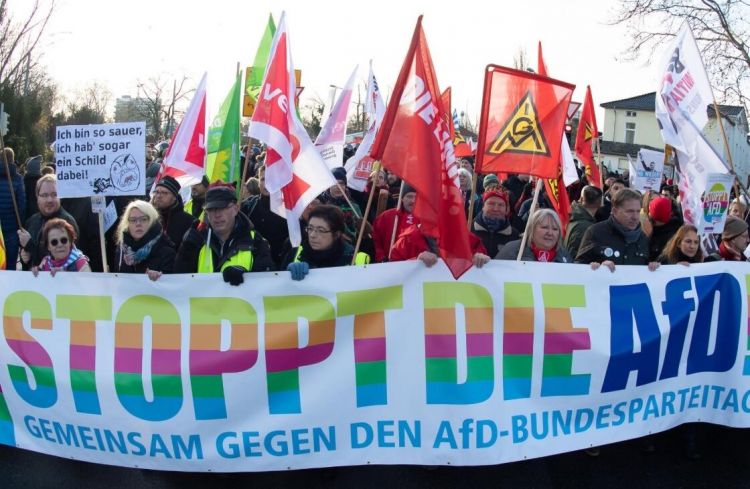 Thousands took to the streets of the north-central  German city of Braunschweig on Nov. 30 to protest against two-day congress of the far-right Islamophobic Alternative for Germany (AfD) party, Eurasia Diary reports citing Hurriyet Daily.

More than 15,000 people have demonstrated against the AfD party congress, said a spokesman for the organizing team, adding that there were no reports of any incidents during the protests.

Shortly before the beginning of the AfD congress, protesters blocked important access roads leading to the venue of the party meeting, a police spokesman said. There were no immediate reports of any arrests.

On Nov. 29 evening, according to the police, about 900 protesters had demonstrated in Braunschweig's city center as part of a nationwide campaign.

Meanwhile, the AfD delegates re-elected Jorg Meuthen at the congress as one of the co-leaders of the right-wing populist party.

The AfD is not only the largest opposition party in the Bundestag, but it has also managed to get into the European Parliament and all the state parliaments.

The party is performing the strongest in former East Germany states, polling well over 20 percent.

The AfD is, in fact, riding a shocking rise of German Islamophobia and xenophobia. In its annual report on the state of German unity, the German government had warned that xenophobia represents a danger to social harmony.

A case in point was the East Germany-based neo-Nazi terror cell the National Socialist Underground (NSU) which was involved in anti-foreigner killings in 2000-2007.

It took German authorities almost a decade to connect 10 murders against mostly Turkish business owners and trace them to the NSU, sparking an investigative committee in the German Parliament and a national outcry about authorities' blind spots to right-wing terrorism.

The NSU's racially motivated attacks still resonate to this day.