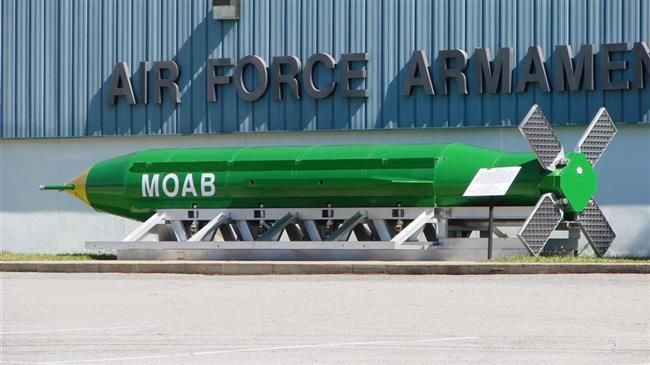 Over two and a half years after the US dropped its most powerful non-nuclear bomb on an eastern Afghan province, locals are now complaining that America’s “mother of all bombs” have brought them “many diseases” and affected crop yield in agricultural lands, Eurasia Diary reports citing Press TV.

Back in April 2017, the US military dropped the biggest bomb in its non-nuclear arsenal onto what it described as a Daesh hideout in Afghanistan’s Nangarhar Province.

According to the Afghan government, the attack killed more than 90 Daesh militants. The US however did not release any figure.

Almost two and a half year on, local residents are reporting “many diseases” and health problems that they believed have been caused by the bomb.

The Afghan daily Tolo news cited local residents who said the diseases have emerged regions close to the targeted area.

One of the residents told the newspaper that many children and teenagers are suffering from skin problems.

“The ‘mother of all bombs’ was dropped here,” said Pacha Shinwari, a local resident. “You can see that the stones can be broken easily, the plants are dry, the trees are dry, the nearby houses are all destroyed — 40 or 50 of them.”

“The government evacuated the people (before the bomb was dropped), but when we came back, we saw that the houses were destroyed,” said another resident.

The residents also explained that the agricultural yields “are not the same as in the past. The harvests are lesser than in the past.”

Just days after the bombing, an Afghan parliamentary delegation visited the province to investigate the impact of the bomb on the area; however, no further probes could be conducted in the area due to security issues, officials said.

But now, the Afghan Ministry of Public Health announced it is set to send researchers and medics to the bombing site and to hospitals in Jalalabad, the provincial capital of Nangarhar to conduct further analysis on the bomb’s impacts.

“People will feel irritation in their eyes. Second, it impacts the inner organisms of the people who breathe the air where it has been used,” he said.

He said the MOAB also “impacts pregnant women and newborn babies… Afghanistan is a laboratory now. Third, it has an impact on lungs.”

Afghan civilians have long been the main victim of Washington’s so-called war on terror in the country.

They have been targeted by US drone attacks, improvised explosive devices (IEDs), assassinations, bombings, and night raids into houses of suspected militants.

The United Nations reported last month that  civilian casualties caused by the long and intensifying conflict in the country reached a record number in the third quarter of 2019.

The US invaded Afghanistan in October 2001 and overthrew a Taliban regime in power at the time, vowing to bring stability to the war-ravaged nation.

The Taliban’s five-year rule came to an end following the US invasion, but 18 years on, Washington has failed to end Taliban’s militancy.