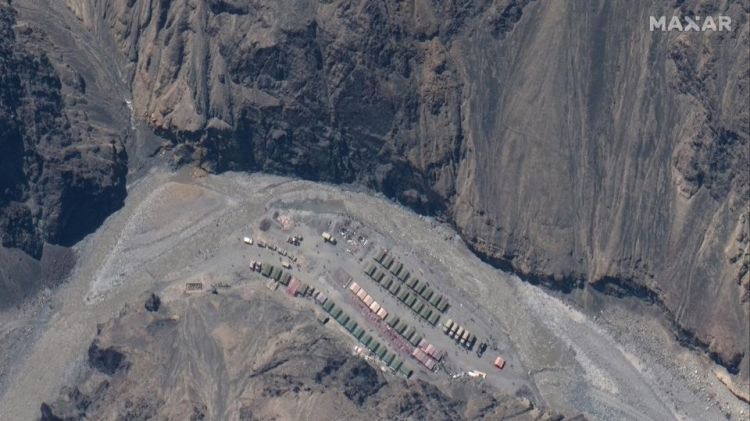 Tensions are common between the two nuclear-armed neighbours in the mountainous border terrain, but this month's fighting was their deadliest encounter in over 50 years.

State broadcaster CCTV showed footage of hundreds of new troops lining up in the Tibetan capital.

Tibet commander Wang Haijiang said the Enbo Fight Club recruits would "greatly raise the organisation and mobilisation strength" of troops and their "rapid response and support ability," China National Defense News reported, although he did not explicitly confirm their deployment was linked to ongoing border tensions.

The deadliest clash in decades

Chinese and Indian troops clashed later that day in the most violent confrontation between the two powers in decades, in the Ladakh region 1,300 kilometres away.

India says 20 of its own soldiers were killed in brutal hand-to-hand combat that day, while China suffered an unknown number of casualties.

Both sides have blamed each other for the battle, which was fought with rocks and batons without any shots fired.

India said Thursday that it had reinforced troops in the contested Himalayan border region, saying it was matching a similar buildup by China.

The new troops were recruited with the aim of "strengthening the border and stabilising Tibet," China National Defense News said.

India claims Chinese troops ambushed Indian soldiers and forced them down a ridge where they had gone to remove a Chinese "encroachment".

Construction activity appeared underway on both the Indian and Chinese sides of a contested border high in the Karakoram mountains, satellite images showed.

The images released this week by Maxar, a Colorado-based satellite imagery company, show new construction activity along the Galwan River Valley, even as Chinese and Indian diplomats said military commanders had agreed to disengage from a standoff there.

The images appeared to show that the Indians had built a wall on their side and the Chinese had expanded an outpost camp at the end of a long road connected to Chinese military bases farther from the poorly defined border, according to experts.

The contradictions in words and deeds showed the fragility of an agreement following the worst violence since the Asian giants went to war in 1962 over their competing claims to the arid border region, experts said.

A bilateral accord prevents the use of guns, but the fighting was still fierce, with rudimentary weapons.

China has in turn accused Indian soldiers of twice crossing the Line of Actual Control, the unofficial boundary, provoking its troops.

The two countries fought a war over the border in 1962. There is an understanding between the nuclear-armed neighbours that their troops in the disputed and inhospitable region will not use firearms.