Azerbaijani MoD - Armenians created a fake Twitter account using the name of the Ministry of Defense of Azerbaijan
Read: 490

Turkey, WHO sign agreement to open office in Istanbul 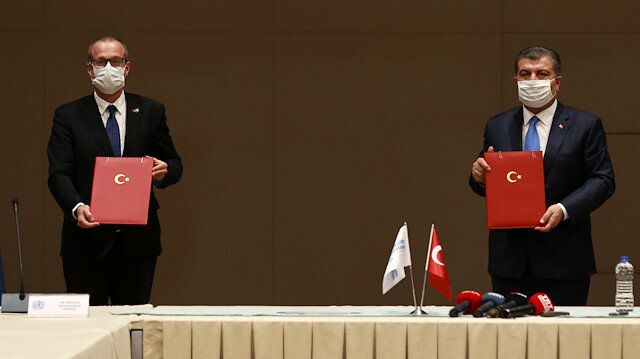 Turkey and the World Health Organization (WHO) signed an agreement on Thursday to open an office in Istanbul for humanitarian and health emergencies, EDNews.net reports citing Yeni Safak.

Once opened, the office will guide efforts to meet current needs in the novel coronavirus outbreak, Turkish Health Minister Fahrettin Koca said at a press conference alongside WHO Regional Director for Europe Hans Henri Kluge.

"We expect WHO to become a more proactive structure in the new period, especially in emergencies," Koca said.

He urged a "period of global consultation, in which WHO is reevaluated with the truths, mistakes, successes, and failures."

For his part, Kluge said the planned office would serve Europe.

Data reported since April has shown that Turkey is "turning the corner" in its battle with COVID-19, reducing case loads and deaths by over 75%, said Kluge, underlining the importance of emergency preparation and readiness, developing local diagnostic tests and strengthening testing, contact tracing, and treatment.

Expressing appreciation and respect to Turkey for its solidarity in the face of COVID-19, Kluge also praised the country's success in fighting the pandemic with low deaths among the elderly.

"We must also be ready to address high risks, especially [among the] elderly, in the autumn, when the influenza season arrives. To sustain Turkey's success this far with low mortality from COVID-19 among the elderly, we will need targeted interventions, such as flu vaccinations, infection prevention, and control."

Authorities, partners, communities, academia, the government and all of society have contributed to Turkey's success in fending off the "initial peaks," he said, adding that people must understand that "no one is safe until everyone is safe."

Kluge also said he told German authorities that the current conditions in Turkey would allow a reopening of borders to the country.

Since originating in China last December, the virus has infected 12 million people across 188 countries and regions.

It has claimed over 550,000 lives worldwide, while over 6.64 million patients have recovered so far, according to figures compiled by the US' Johns Hopkins University.