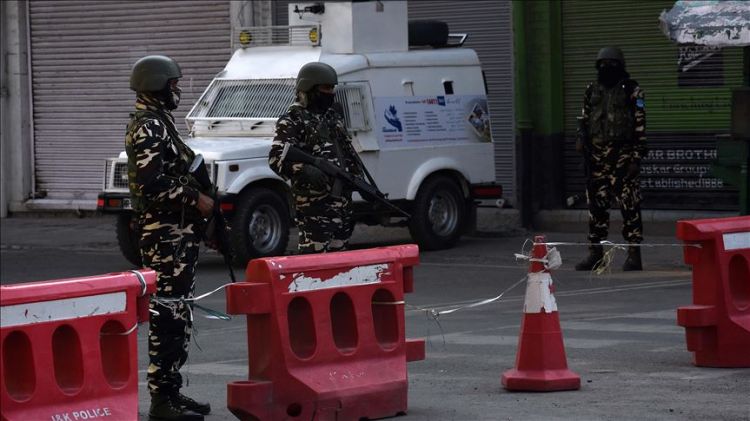 Strict restrictions were imposed in Indian-administered Jammu and Kashmir on Wednesday, as the day marked the first anniversary of India’s decision of revoking the seven-decade-long semi-autonomous status of the Himalayan region, EDNews.net reports citing Anadolu Agency.

Since early morning policemen and paramilitary personnel were seen stopping people at important intersections, some of which were blocked with concertina wire or iron barricades.

In Srinagar's main city center, Lal Chowk, paramilitary forces were deployed in large numbers to enforce restrictions while a clutch of photographers was seen filming the scene. The access to the city center has been blocked by placing barricades, and concertina wire.

The restrictions were stricter in the old areas of Srinagar, traditionally the bastion of pro-freedom protests. The majority of the roads leading to these areas had been blocked, with a posse of policemen questioning an occasional commuter or passerby before letting him through or turning him back.

“Restrictions were even more severe on Tuesday. They stopped every passerby. India should be ashamed of saying that special laws were repealed for our good. They only want to subjugate us,” said Tariq Ahmad, a resident of Dalal Mohalla in the old city.

Apprehending protests, the authorities had announced two-day curfew on Tuesday. Later in the evening in some localities, they announced withdrawing curfew but said restrictions will remain enforced due to COVID-19 pandemic.

Speaking to Anadolu Agency, a policeman manning a check post at Karan Nagar locality said they have been asked to restrict the movement of people.

“We are stopping people here means there are restrictions in place. COVID-19 or curfew, does not matter," said the police official, who spoke on condition of anonymity due to restriction on speaking to the media.

A statement issued in the name of ailing pro-freedom leader Syed Ali Geelani had asked people to observe the day as an “awareness day” and appealed to the Kashmiri diaspora to hold protests worldwide, especially outside Indian embassies.

Pakistan Foreign Ministry last Friday called for observing Aug. 5. as Youm-e-Istehsal, or the Day of Exploitation.

Due to restrictions and strict lockdown enforced soon after the dissolution of the state one year ago, the region did not witness large scale protests.

Ahead of scrapping the legislation that provided autonomous status to the region, India deployed tens of thousands of soldiers in Jammu and Kashmir to prevent a backlash. Also, telephones and the internet connections were snapped and more than 7,300 pro-freedom and pro-India leaders and activists were sent to prisons.

Jammu and Kashmir is held by India and Pakistan in parts and claimed both in full. A small sliver of Kashmir is also held by China.

Some Kashmiri groups in Jammu and Kashmir have been fighting against Indian rule for independence, or unification with neighboring Pakistan.