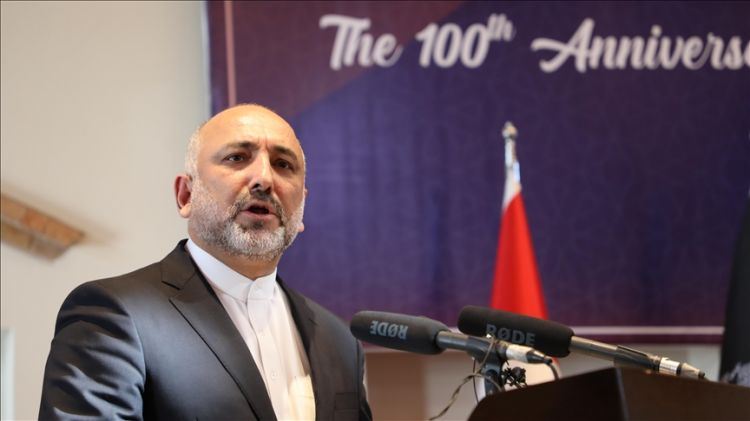 Addressing a ceremony in this connection, Afghan Foreign Minister Mohammad Haneef Atmar hailed the time-tested brotherly and friendly ties between the two countries.

Providing a brief overview of the 100 years of relations, Atmar said a new chapter of ties between Afghanistan and Turkey opened in 2001 with the fight against terrorism when Turkey joined the international community in pledging troops and engaging in reconstruction efforts.

“Turkey can play a key role in building and promoting a regional consensus for peace in Afghanistan,” he said while asking the Turkish government and people of Turkey to continue their support for the joint aim of a dignified and sustainable peace in Afghanistan.

He thanked Ankara for over a billion dollars’ worth of reconstruction aid to Afghanistan, providing scholarships to over 4,000 Afghan students and accommodating over 200,000 Afghans living in various Turkish cities.

Speaking on the occasion, Turkish Ambassador to Afghanistan Oguzhan Ertugrul reiterated his country’s support for the Afghan-led peace process.

In an opinion article published by a number of Afghan media outlets, Ertugrul said: “We are ready, as long as our help is needed, to support our Afghan brothers with a view to contributing to efforts for achieving a sustainable peace embraced by all segments of the Afghan society and by regional and international actors.”

He urged both the Afghan government and the Taliban not to miss the opportunity for peace.

“We must not forget that the road to peace is long and full of challenges. Besides, the ultimate aim should not be any peace, but a sustainable, enduring one. So each side bears a historic responsibility not to miss this opportunity.”

The Ankara government was officially recognized by Afghanistan through the Treaty of Alliance signed on March 1, 1921.

One of the first resolutions adopted by the Ankara government was related to the opening of a diplomatic mission in Kabul. Accordingly, a Turkish officer of Afghan origin, Abdurrahman Samadan, was appointed in 1920 as the Turkish representative to Afghanistan. The Turkish embassy became the first diplomatic mission in Kabul. Turkey was the second country to recognize Afghanistan.

On June 10, 1921 in Ankara, the Afghan embassy in Ankara was inaugurated, and Turkey’s founder Mustafa Kemal Ataturk himself raised the Afghan flag on a pole.

Turkey’s close cooperation with Afghanistan continued until the start of the Second World War. When Ataturk passed away in 1938, Afghanistan was the only country to officially declare a week-long mourning period with flags flown at half-mast.

In order to celebrate March 1 as Turkish-Afghan Friendship Day every year, the two countries’ foreign affairs ministries signed a Memorandum of Understanding in Istanbul on Dec. 24, 2010.