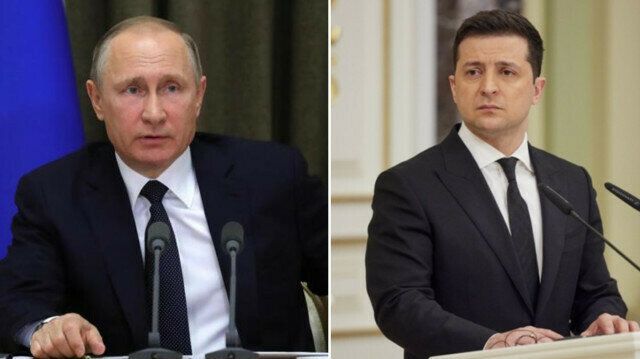 Russian President Vladimir Putin said on Thursday that he is ready to receive his Ukrainian counterpart Volodymyr Zelensky in Moscow "any time."

According to Yeni Safak, speaking at a meeting with Belarussian President Alexander Lukashenko, Putin said if Zelensky wants to discuss the problems of Donbas, he had to meet with the leaders of the separatists in the region, and if he wants to discuss Russian Ukrainian relations, then he is welcome to Moscow.

Putin said "the acting leadership of Ukraine has taken a lot of steps aiming to destroy Russian-Ukrainian relations," however, if Zelensky wants to start restoring them, Russia would welcome this.

"The question arises: What do we want to discuss at this meeting? If we're talking about discussing the problems of Donbas, then, first of all, the Ukrainian leadership should meet with the leaders of the republics -- the LPR [Luhansk People's Republic] and the DPR [Donetsk People's Republic], and only then discuss these problems with representatives of third countries, which in this case is Russia. This is the first,

"And secondly, if we are talking about the development of bilateral relations, then please, we will receive the president of Ukraine in Moscow at any time convenient for him," he said.

For his part, Lukashenko commented on the proposal to change the platform of the intra-Ukrainian peace talks, which he said Minsk was hosting upon the request from all sides, including former Ukrainian President Petro Poroshenko.

But, if Kyiv sees it inappropriate to work in Minsk further, then none would seek to persuade him otherwise, Lukashenko said.

"If they don't like it [holding peace talks in Belarus] today, please, they can choose any other country, but you should keep in mind that there should be a consensus of those who once proposed it."

After weeks of rising tensions, Russian Defense Minister Sergey Shoygu announced on Thursday that Moscow would start withdrawing its troops from the border with Ukraine.

The move came after a weeks-long war of words when Kyiv and breakaway regions accused each other of violating the truce. Ukraine also accused Russia of sending troops to the border, while Moscow says its moves were in response to "Kyiv's provocative actions,” saying its western neighbor is preparing an offensive aiming to secure a military solution to the conflict with the possibility of hostilities on the border.

"Ukraine is always vigilant, yet welcomes any steps to decrease the military presence and deescalate the situation in Donbas. Ukraine seeks peace. Grateful to international partners for their support," Zelensky said.