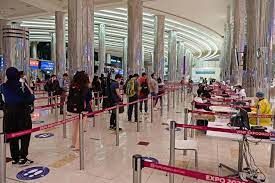 The UAE will bar entry to all travellers from Bangladesh, Pakistan, Nepal and Sri Lanka from Wednesday night in new Covid-19 rules.
The decision affects incoming flights and all carriers, excluding transit services.
The General Authority of Civil Aviation and National Emergency Crisis and Disasters Management Authority (Ncema) issued the decision on Tuesday.
The last flights to be allowed entry to UAE will be at 11.59pm on Wednesday May 12. Officials cited Covid-19 as the reason, without elaborating.
In Bangladesh on Saturday, officials confirmed the first case of an Indian virus variant. That followed weeks where the South African variant was largely seen in patients.
In Sri Lanka, a similar discovery was made of India's B.1.617 strain in a person who returned from India and was screened at a quarantine centre in Colombo.
And in Pakistan on Monday, the government halted access to many tourism areas until May 16 due to the recent surge there.
"This decision also includes extending the suspension of entry for travellers who were in these four countries in the 14-day period prior to arrival in the UAE," Ncema said.
"Flights between the four countries will continue to allow the transport of passengers from the UAE to Bangladesh, Pakistan, Nepal and Sri Lanka and the transfer of exempted groups from these countries to the UAE who have applied for exemption.
"Exempted travellers, including UAE citizens, those on diplomatic missions accredited by the four countries, official delegations, those traveling on business planes, and golden residence holders, will be subject to precautionary measures that include a 10-day quarantine and PCR testing at the airport and on the fourth and eighth days after entering the country.
"The required PCR testing period prior to travel has been reduced from 72 to 48 hours, and all tests must be administered by accredited laboratories that issue results carrying a QR code."
The General Authority of Civil Aviation said that travellers from these four countries, transitting through other countries, are required to provide proof of a period of stay of no less than 14 days to be allowed into the UAE.
Cargo flights are also excluded from the ban.