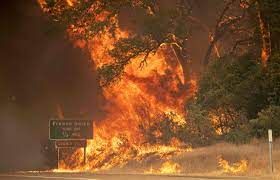 The Beckwourth Complex Fire made a significant run Saturday afternoon and grew to 61,252 acres (247.9 square km) with only 9 percent containment, according to the latest information from Inciweb, an interstate incident information system.
The fire, which broke out on July 3, forced more evacuations from many small towns in California's Lassen County, Plumas County and Nevada's Washoe County.
The blaze also closed Highway 395 north of the junction with Highway 70 and cut off power to some residents for a period of time as the fire threatened Plumas Sierra Rural Electric transmission lines.
At a virtual community meeting Saturday night, officials said critically dry weather and high temperatures, topography arrangement and southwest winds funneling through the area are aiding the swift spread of the fire.
A total of 1,790 firefighter are battling with the aggressive fire, the officials said, adding due to the threat that it posed to the crew, "the firefighters had to withdraw" and focused on protecting structures in towns.
Hot and dry weather condition would continue through Tuesday, said the officials, predicting the fire "will continue to grow over the next five to six days,"
During the meeting, Incident Commander Rocky Opliger urged local residents to follow evacuation order when told, noting "the highest percentage of fatalities come when people wait to the last minute to evacuate."
California Incident Management Operations Section Chief Jake Cagle was quoted by the local Reno Gazette Journal as saying that following evacuations is the best way to help firefighters.
"We know that there are a lot of people up there and it's going to be an imminent threat," Cagle said. "The fire is pushing hard through here so if you live there, you need to evacuate immediately or it's going to impact our operations."