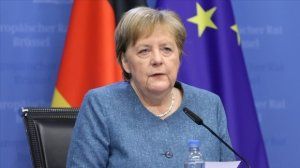 German Chancellor Angela Merkel said Thursday that the agreement with the US government on the controversial Nord Stream 2 gas pipeline is a "good step" but acknowledged that not all differences could be overcome, Eurasia Diary reports citing Azeri Daily.

Speaking at her annual press conference in Berlin, Merkel said that “differences remain, and we have seen that by the reactions."

It is an attempt to establish certain conditions between the US and Germany that must also be implemented, she said, adding it is very important that Ukraine remains a gas transit country and that energy cannot be used to put Ukraine in a difficult situation.

The German leader said Russia had made it clear to her that energy would not be used as a "weapon.”

We take Russia at its word and we are not completely defenseless, said Merkel, referring to the possibility of sanctions.

In a joint US-German statement released Wednesday, both countries warned Moscow against using the Nord Stream gas pipeline as a tool against Kyiv.

"Should Russia attempt to use energy as a weapon or commit further aggressive acts against Ukraine, Germany will take action at the national level and press for effective measures at the European level, including sanctions, to limit Russian export capabilities to Europe in the energy sector, including gas, and/or in other economically relevant sectors," it said.

"This commitment is designed to ensure that Russia will not misuse any pipeline, including Nord Stream 2, to achieve aggressive political ends by using energy as a weapon," the statement added.

Both Berlin and Washington expressed "support for Ukraine and Europe’s energy security."

Reacting to the Nord Stream 2 agreement, Ukraine and Poland lashed out at the US-German move, saying in a joint statement that the "decision has created political, military and energy threats for Ukraine and Central Europe."

Warsaw and Kyiv vowed to continue to fight the gas project until their security interests are met.

"Ukraine and Poland will work together with their allies and partners to oppose NS2 [Nord Stream 2] until solutions are developed to address the security crisis created by NS2, to provide support to countries aspiring to membership in Western democratic institutions, and to reduce threats to peace and energy security," the statement said.

The agreement was announced just days after Merkel visited Washington for talks with US President Joe Biden.

The US under successive presidents has warned that the pipeline is a bad deal for Germany and jeopardizes European energy security as well as posing the risk that Russia might cut off gas supplies that currently run through Ukraine.

Under the pact, Berlin agreed to appoint a special envoy to help extend the existing gas contract that it has with Russia "well beyond" its current expiration in 2024.

The Nord Stream 2 pipeline will carry gas from Russia to Germany, which will then be distributed throughout the European Union.