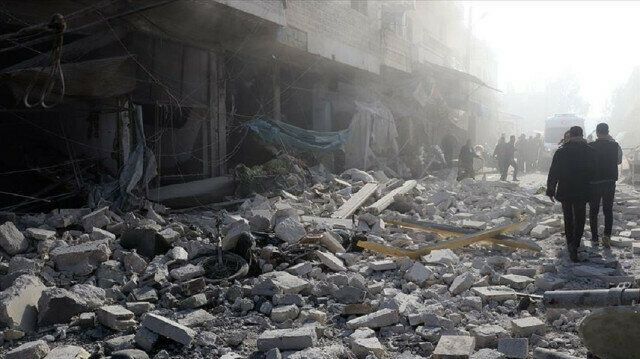 The Bashar al-Assad regime and its supporters since last month have violated the cease-fire agreement in Syria’s northwestern Idlib province at least 800 times, killing 66 civilians.
“The Syrian regime, Iran-backed terror groups, and Russia have violated the cease-fire more than 800 times by attacking people in the last 45 days,” Muhammed Hallaj, the head of the Emergency Response Coordination Group, told Anadolu Agency.
“Of the 66 civilians, who lost their lives in the attacks carried out by the regime forces and Russia in the last one-and-half months, 29 are children, 10 of them women, and five are humanitarian aid workers,” said Hallaj.
He added that the regime forces also targeted the civil defense center and different health facilities, with 19 buildings being rendered inoperable due to the attacks.
“At least 4,500 civilians were displaced as a result of intense attacks by the Assad regime and its supporters. If the attacks continue, 250,000 more civilians may be forced to flee,” he added.
Idlib falls within a de-escalation zone forged under an agreement between Turkey and Russia in March 2020. The Syrian regime, however, has consistently violated the terms of the cease-fire, launching frequent attacks inside the de-escalation zone.
Syria has been mired in a vicious civil war since early 2011 when the Bashar al-Assad regime cracked down on pro-democracy protests with unexpected ferocity.
Over the past decade, around half a million people have been killed and more than 12 million had to flee their homes.