Irregular migrants say they walked to Van province for 45 days, paid around $1,000 to human smugglers for perilous journey 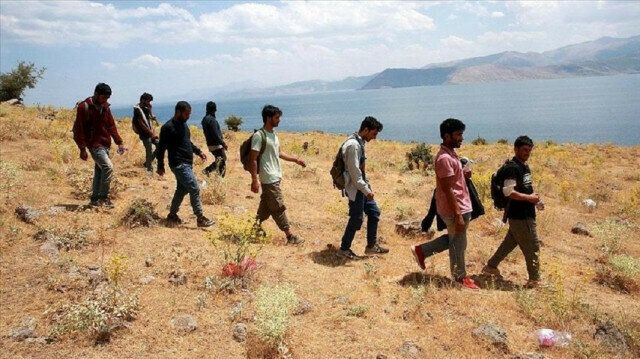 Some Afghan irregular migrants have alleged that they were beaten in custody by Iranian soldiers before being released at the Turkish border.
Gulab Jemili, an Afghan who illegally entered Turkey's eastern Van province, said he along with others migrated to Iran due to armed conflict in their country. But they were apprehended and subjected to ill-treatment by Iranian soldiers.
Hundreds of irregular Afghan, Pakistani, and Bangladeshi migrants arrive in Turkey illegally via Iran, either in vehicles or on foot across long distances. During their perilous journey to Europe in search of a better life, they communicate with one another using smartphone applications.
However, the majority of them are entrapped by criminals along the road, with some losing their lives and others being detained in Turkey, according to these irregular migrants.
Talking to Anadolu Agency on Tuesday, Jemili alleged that the Iranian soldiers tortured all of the detainees and killed some of his companions before throwing them at the Turkish border after stealing their clothes and money.
However, his claim was not independently verified.
"After crossing to Turkey, we fell into the hands of human smugglers, they took $1,000 from us. We traveled by foot to some locations and by vehicle to others. The smugglers sent us locations, and we have to navigate our way through these," he stated.
Jemili said they were on the road for over one and a half months.
"Everyone is devastated... We're at a loss on what to do. In Afghanistan, there is a war. Our schools are bombed. If we stay and fight, we won't know against whom we'll be fighting; brothers are killing one another. We were forced to travel to Iran, but they beat us up and told us that this was not our country and that we should go to Turkey instead "he said.
- 220 people in a truck
Mohammed Tenha, an Afghani who arrived at the Tatvan area on Lake Van's western bank, said his country is experiencing severe problems as many of his relatives have died during the ongoing armed conflict.
"I have not eaten bread for the past four days. We have been walking for 45 days now. They detained us in Iran, and I spent three to four days at the police station. Then they handed us a document and told us to go to Turkey, or back to Afghanistan. They threatened to harm me if they saw me in five days. After that, they let us go," he said.
He claimed that he and other Afghans entered Turkey illegally and paid money to Iranians who transport immigrants.
"I gave $1,200, and a friend paid $1,500," he claimed, adding, "We used to talk on the phone with friends, but the Iranian police took our money and phones and set them on fire."
"They left us at the border," he said and added that "We drove here from Van in a truck with 220 people (irregular migrants) sleeping in it."