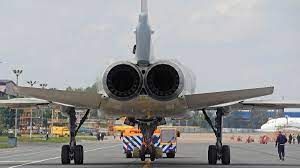 Large swathes of Afghanistan’s northern frontiers have fallen into the hands of the Taliban in recent weeks, leading to concerns from its Central Asian neighbours that instability and terrorism may spread beyond the war-torn nation. The Taliban has assured neighbours that its militants would not engage in any fighting beyond Afghanistan’s borders.
Four Tupolev Tu-22M3 (NATO codename Backfire) strategic bombers have been transferred to a military airfield in Russia’s Saratov region to take part in joint Russian-Uzbek exercises at the Termez training ground near Uzbekistan’s border with Afghanistan, the Russian ministry of defence announced Thursday.
According to the MoD, the bombers will carry out practice bombing runs against camouflaged enemy militant encampments and ammunition depots. A pair of Uzbek Air Defence Force MiG-29 fighters is expected to provide air cover for the bombers during the drills.
On the ground, about 1,500 Russian and Uzbek peacekeeping units and special forces reconnaissance troops are taking part in the ongoing drills, which are expected to continue until next Tuesday.

Tweet reads: “Russian and Uzbek armed forces units have begun combat coordination to conduct combat training tasks at the Termez range in Surkhandarya region.”
Earlier in the day, Russian Spetsnaz units and their Uzbek counterparts carried out mock sabotage actions against a conditional enemy after landing in rear areas aboard Mil Mi-171 and N-215 helicopters. After deploying, servicemen carried out reconnaissance of the area, located and destroyed an encampment of enemy militants. Tweet reads: “Russian and Uzbek special forces during a joint exercise at the Termez training ground training in sabotage actions against the rear area of a conditional enemy, finding and destroying a camp of the conditional bandit formations.”
Also on Thursday, troops from Russia, Tajikistan and Uzbekistan began exercises at the Harb-Maidon training ground, Tajikistan. The training range is situated about 20 km from the Afghan border.  The drills, set to run until 10 August, involve about 2,500 troops and 500 pieces of military equipment, including forces from the Russian 201st Military Base outside Dushanbe, which redeployed to the training ground last week.
Those exercises are expected to see training in joint operability and the optimal use of troops and resources.
Large swathes of Uzbekistan and Tajikistan’s borders has fallen to the Taliban in recent weeks amid the ongoing withdrawal of US and Western coalition forces from the country after more than 19 years of occupation.
The Kabul government has deployed elite commando units to take some of these areas back, but these forces have been spread thin by Taliban offensives raging across much of the country as militants overrun regular troop formations suffering from low morale.
Last month, the Russian foreign ministry warned that the Collective Security Treaty Organization, which includes Russia, Tajikistan, Kyrgyzstan, Kazakhstan, Armenia and Belarus, would “act decisively” to thwart any threat to allied states. Last week, Russian Defence Minister Sergei Shoigu promised that Russia’s Tajik allies would not have to face any instability along the frontier with Afghanistan alone, and said that the 201st base was set up in the country for the precise purpose of maintaining “stability and tranquility” in the region.
Shoigu also warned that Russian military intelligence was closely monitoring the movements of Daesh (ISIS)* militants to Afghanistan from other countries, including Syria and Libya. The defence minister did not specify what country or countries the fighters were transiting through, or whether they had assistance from any state or non-state actor. This week, the Islamist group began a push against three major cities, with the offensives being the first time that its militants has attempted to capture urban areas since the 2017 Kunduz offensive.
Taliban negotiators have assured Russia, the United States and other countries that they would not allow international terrorist forces to operate in areas under their control, and have told Russian officials that their offensives will not allow for fighting and instability to spread into neighbouring Central Asian nations.