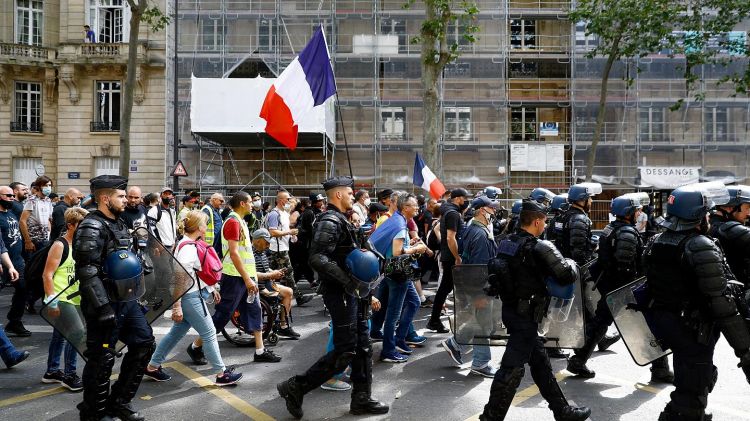 More than 200,000 people have again taken to the streets of France to protest stricter coronavirus rules and compulsory vaccinations for hospital and nursing home workers.
The Ministry of the Interior reported on Saturday evening that about 237,000 people had taken part - the largest rally so far since the new mass protests began last month.
Rallies were again held in the capital Paris, but also in numerous other cities.
According to official figures, there were 17,000 demonstrators in Paris. A focus of the protests this time was in the south.
According to the radio station France Info, up to 37,000 people took part in the Provence-Alpes-Cote d'Azur region. According to initial reports, the demonstrations were largely peaceful.
In Nice alone, between 10,000 and 20,000 people were said to have taken part.
Tension between security forces and demonstrators occurred in Lyon, the third largest city in the country.
On Thursday, France's Constitutional Council approved the controversial compulsory vaccination of health workers as well as the so-called health pass, which provides information about a negative coronavirus test or vaccination against Covid-19. Both are intended to help contain the coronavirus pandemic.
This was the fourth weekend in a row of protests. A week ago, the authorities had already counted more than 200,000 participants nationwide.
The digital health pass is already required in France at the cinema or at major events. From Monday, it will also be required to visit restaurants and bars and when travelling by plane or long-distance train.