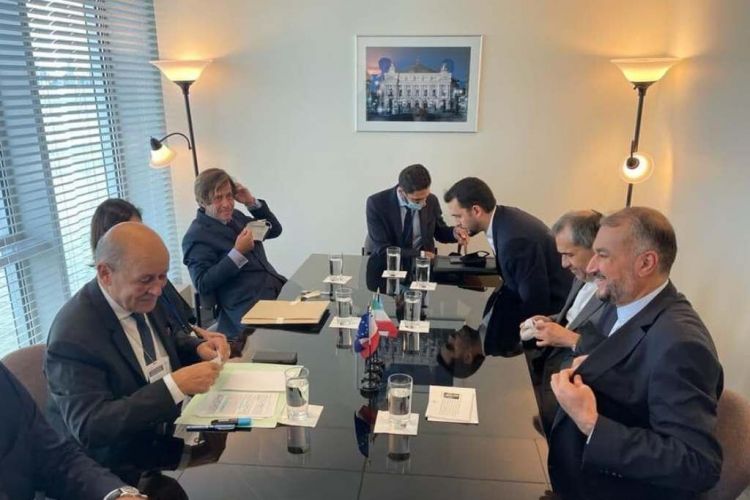 He made the remarks on the sidelines of the UN General Assembly (UNGA) meeting in his meeting with French Foreign Minister Jean-Yves Le Drian in New York on Saturday and stated that the current government of the Islamic Republic of Iran is ‘pragmatic’ and considers negotiations as an important tool of diplomacy.

Amir-Abdollahian reiterated that the Islamic Republic of Iran is ready to return to negotiations.

During the talks, the two sides also discussed bilateral issues, Iran’s nuclear deal, JCPOA, and the latest situation in Afghanistan.

Describing that France is vehemently interested in expanding its relations with Iran, Le Drian said that that recent phone talk between Iranian President Seyyed Ebrahim Raeisi and his French counterpart Emmanuel Macron show the importance that the two sides attach to bilateral relations.

Elsewhere in his remarks, Amir-Abdollahian expressed his regret over non-compliance of the United States and three European countries involved in nuclear talks including France, the UK and Germany to live up to their obligations under JCPOA and emphasized that practical and tangible results for Iranian people are of paramount importance with regards to returning to JCPOA talks.

He then pointed to the growing number of Afghan refugees in Iran and the history of the country in hosting Afghan nationals and called for international support, including from France, for vaccination of asylum seekers in Iran.

French Foreign Minister, for his turn, said that his country is concerned about the delay in the resumption of nuclear talks, stating that France is interested in resuming the talks as soon as possible.

Le Drian agreed with the principled position of Iran on the need to form an inclusive government and prevent the spread of terrorist acts in Afghanistan and stressed the need to help refugees in Afghanistan's neighboring countries as well as Afghan refugees.