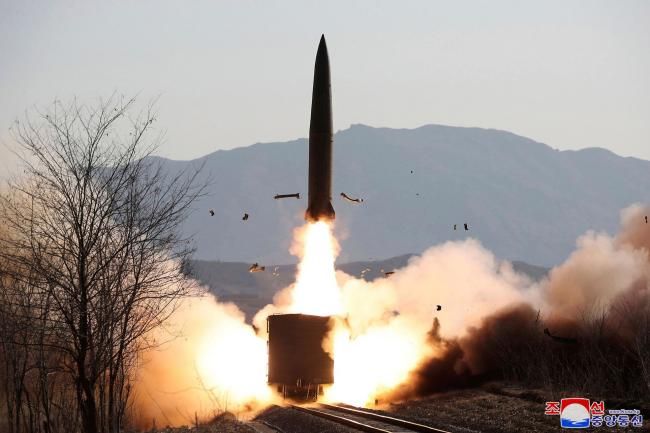 Another two missiles have been fired by the North Korean regime, according to observers, marking the fourth test so far this month.
The South Korean military said that two suspected short-range ballistic missiles had been fired from Sunan Airfield in Pyongyang into the East Sea.
North Korea used the same airport to test fire the Hwasong-12 intermediate-range ballistic missile (IRBM) in 2017.
Local media reported that the South’s Joint Chiefs of Staff (JCS) confirmed the missile launch on Monday morning, just three days after observing the regime fire another two suspected short-range ballistic missiles.
Meanwhile, Japan also said they believed the tests were of ballistic missiles.
Japanese Defence Minister Nobuo Kishi said the weapons travelled an estimated 300 kilometers before landing in the ocean between North Korea and Japan.
“It is self-evident that the aim of North Korea’s frequent missile launches is to improve their missile technology,” he told reporters, noting that they are in violation of U.N. Security Council resolutions that ban North Korea from all ballistic missile development.
Japanese chief cabinet secretary Hirokazu Matsuno also condemned the missile tests as a threat to regional peace and security.
Earlier, Pyongyang claimed that two of its tests, one on Jan. 5 and another on Jan. 11, were “hypersonic” missiles that are capable of high speeds and maneuvering after they’re launched.
The series of launches prompted U.S. President Joe Biden’s administration to impose its first sanctions against Pyongyang on Jan. 12, and to call on the U.N. Security Council to blacklist several North Korean individuals and entities.
Meanwhile, a North Korean train was reported to have pulled into a Chinese border town on Sunday just before the missile tests—the first such crossing since anti-coronavirus lockdowns began in 2020.
“This timing suggests Beijing is more than complicit with Pyongyang’s provocations; China is supporting North Korea economically and coordinating with it militarily,” said Leif-Eric Easley, a professor of international studies at Ewha University in Seoul.