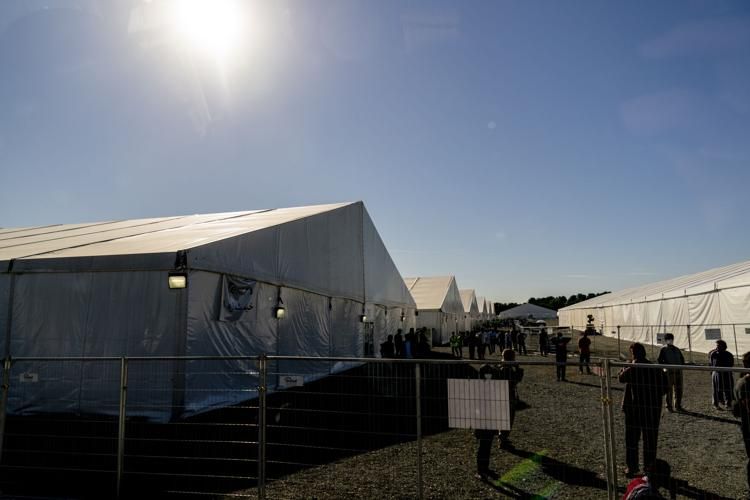 The last of thousands of Afghan refugees who awaited resettlement at eight U.S. military installations departed Saturday from a base in New Jersey, completing a journey that started with the chaotic evacuation from Kabul in August.
With assistance from refugee resettlement organizations, Afghans evacuated after their country fell to the Taliban have been gradually leaving the military bases in recent months and starting new lives in communities throughout the United States.
The U.S. admitted 76,000 Afghans as part of Operation Allies Welcome, the largest resettlement of refugees in the country in decades.
“It’s a really important milestone in Operation Allies Welcome but I want to stress that this mission isn’t over,” said Krish O’Mara Vignarajah, president and CEO of Lutheran Immigration and Refugee Service, one of nine national resettlement organizations that were part of the effort.
Afghans still in their country but facing danger under Taliban rule as well as those who have made it to the United States will still need assistance, Vignarajah said.
“Successful resettlement and integration won’t happen in just a matter of days or weeks,” she said. “Our new Afghan neighbors are going to need our support and friendship for months and years to come because the challenges they face won’t disappear overnight.”
The U.S. plans to admit thousands of Afghan refugees over the next year but they will arrive in smaller groups and will be housed in a facility at a location yet to be determined, the Department of Homeland Security said.
Housing facilities for refugees at Joint Base McGuire-Dix-Lakehurst in central New Jersey will remain open in the interim, the agency said. The base held the largest number of Afghans, reaching a peak of 14,500. The next largest was at Ft. McCoy in Wisconsin, where the last group departed this past week.
Afghans underwent immigration processing and health screening while they waited at the bases, often for months, until the strained refugee organizations could place them in communities. The government set up schools for the children who made up about 40% of the refugees at the New Jersey base.
Resettlement organizations and Homeland Security, the lead federal agency in the effort, had set a goal of having everyone off the bases by Feb. 15. It was a challenge because of the scarcity of affordable housing, cutbacks to refugee programs under former President Trump and the sheer number of refugees.
Most of the refugees have settled in established Afghan communities in northern Virginia and the surrounding Washington area, as well as Northern California and Texas.
States where 1,000 to 3,000 have settled include Arizona, New York, Florida, Georgia, Colorado, Nebraska and Pennsylvania, according to State Department data obtained by the Associated Press.
The Department of Homeland Security has previously said about 40% of the Afghans will qualify for the special immigrant visa for people who worked as military interpreters or for the U.S. government in some other capacity during America’s longest war.
Most of the rest, however, do not yet have permanent legal residency in the U.S. because they did not come under a refugee program but were admitted under a type of emergency federal authorization known as humanitarian parole.
Advocates for the refugees, including a number of prominent veterans groups, are pressing Congress to provide permanent residency with an “Afghan adjustment act,” similar to what has been done in the past for Cubans and Iraqis.