It has been 11 years since civil war erupted in Syria - ednews.net

It has been 11 years since civil war erupted in Syria 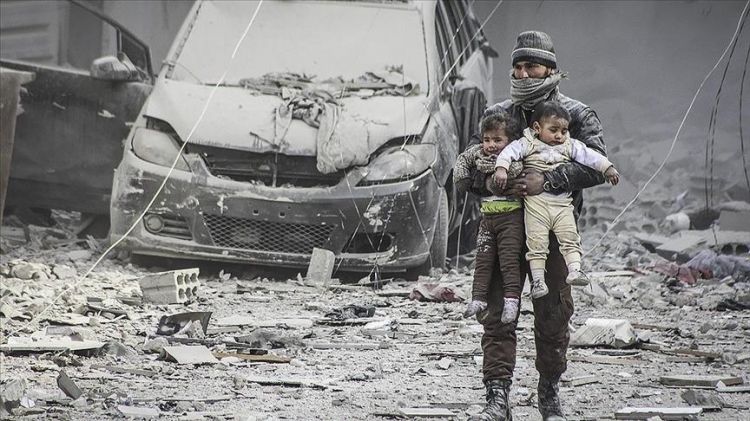 Eleven years have passed since the March 15 popular uprising in 2011, when a group of primary school students in Syria's southern city of Daraa wrote “Next it’s your turn, doctor!” on their school building wall, referring to President Bashar al-Assad, Anadolu Agency reports.

The Assad regime, which declared the civilians who wanted a change of power through peaceful demonstrations as "terrorists," mobilized its soldiers and security forces to suppress the protests.

This move of the regime led to peaceful public demonstrations turning into a civil war. Armed clashes began in 2012 between the Assad regime forces and the military opposition groups gathered under the name of the Free Syrian Army.

With Russia's participation in the war in September 2015, the course of the civil war turned in favor of the regime that regained control of most of the lands through intense attacks and blockades.

On Jan. 23-24, 2017, the first Astana meeting was held under the initiation of Russia and Turkiye. Three years later, Turkish President Recep Tayyip Erdogan and his Russian counterpart Vladimir Putin agreed on a cease-fire in Idlib, with Turkiye and Russia as guarantor countries observing the cease-fire for all military actions.

On May 26, 2021, it was claimed that Assad received 95.1% of the votes in the election, where more than half of the people did not participate.

In February, Abu Ibrahim al-Hashimi al-Qurashi, the ringleader of the Daesh/ISIS terror group, was killed by US forces.

The regime carried out 217 chemical weapons attacks on civilians. Some 6.6 million Syrians had to leave their country and more than 3.5 million of these people took refuge in Turkiye.

According to the UN Office for the Coordination of Humanitarian Affairs, 6.7 million people have been internally displaced, while at least 14 million civilians in Syria in need of humanitarian assistance.

A UN statement on Sept. 24, 2021 said the number of confirmed deaths in the Syrian civil war is around 350,000, while the actual figure is estimated to be much higher.

The Assad regime tortured at least 14,449 people to death. According to opposition sources, the regime forces are still detaining about 400,000 people.