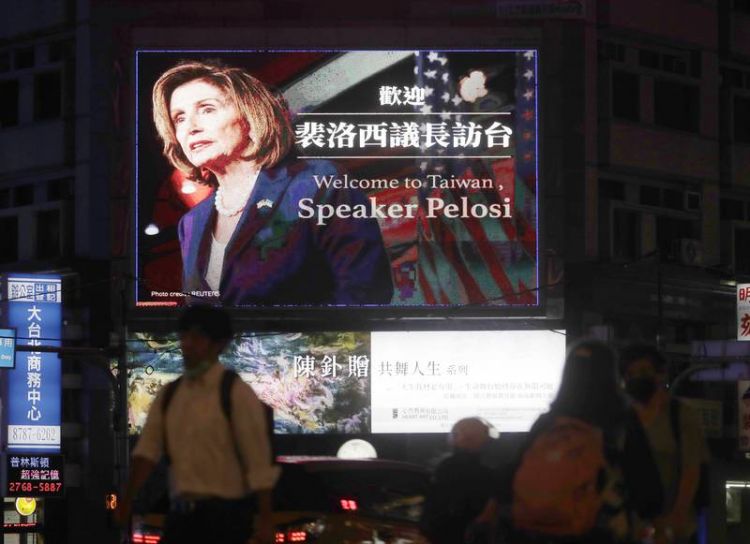 China has begun to hold military exercises that include the use of live ammunition in the waters and air space around the island of Taiwan.
The People’s Liberation Army drills will continue until around noon on Sunday, state media in Beijing reported early on Thursday.
The exercises come at a time of heightened tension after this week's visit by US House of Representatives Speaker Nancy Pelosi, despite protests from Beijing.
Taiwan's defence ministry said its military would continue to reinforce its alertness level and would react appropriately.
The island's military is closely monitoring the “enemy situation” in the strait and near the outlying islands, and all of its troops are carrying out training exercises daily, as usual, the defence ministry said.
The Association of South-East Asian Nations issued a warning on Thursday that volatility caused by tension in the Taiwan Strait could lead to “miscalculation, serious confrontation, open conflicts and unpredictable consequences among major powers”.
“Asean stands ready to play a constructive role in facilitating peaceful dialogue between all parties,” the regional bloc said, as it called for maximum restraint and for parties to refrain from provocative action.
China, which claims Taiwan as its own territory and has never renounced using force to bring it under its control, said its differences with the self-ruled island were an internal affair.
“Our punishment of pro-Taiwan independence diehards, external forces is reasonable, lawful,” China's Taiwan Affairs Office said.
After Ms Pelosi’s visit, China blocked a number of imports from Taiwan and announced military drills.
Taiwan's government also urged companies to enhance their cyber security in the coming days as authorities were reporting a record number of attacks on their websites. However, it did not directly point the finger at China.
The island’s defence ministry was hacked on Wednesday evening and went offline. Unidentified aircraft, believed to be drones, also flew over the island.
Taiwan scrambled jets after 27 Chinese aircraft entered its air defence zone, the island's defence ministry said, adding that 22 of them crossed the median line separating the island from China.
The US and the foreign ministers of the Group of Seven most developed nations warned Beijing against using the visit as a pretext for military action against Taiwan.