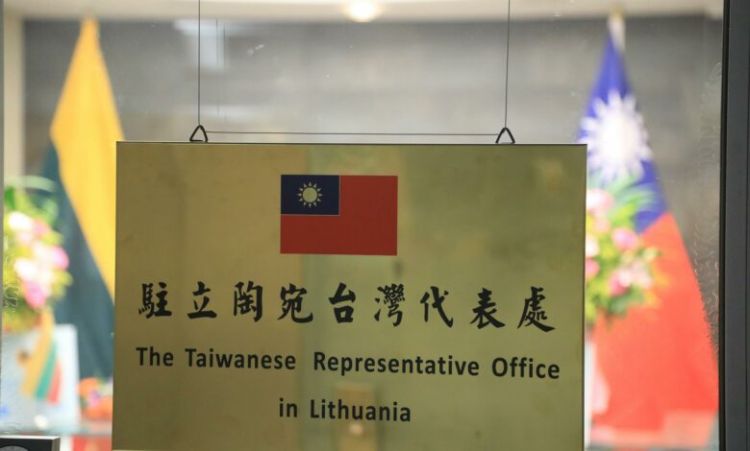 China has imposed sanctions against Lithuania’s deputy minister of transport and communications, Agne Vaiciukeviciute, and suspended exchanges and cooperation with her ministries after she visited Taiwan earlier this week, Latina Billingual Media reports.

Chinese foreign ministry said in a statement published by state media on Friday that it was suspending “all forms of exchange” with the Lithuanian transport and communications ministry, apart from halting cooperation with the European nation in the field of international road transport.

The ministry did not provide details of the sanctions imposed against Vaiciukeviciute, but they are likely to include a ban on entry in mainland China, Hong Kong and Macao and business restrictions in the Asian country.

The measures come after the deputy minister’s recent five-day visit to Taiwan, which “trampled” on the One-China principle according to Beijing. China has called the trip interference in its internal matters and an attempt to undermine its territorial integrity.

Last week, the Chinese government had imposed sanctions against the speaker os the United States’s House of Representatives, Nancy Pelosi, and suspended dialog with Washington in key areas such as defense and climate change, in retaliation for Pelosi’s controversial Taiwan visit on Aug. 3.

The US leader’s trip led to US-China ties deteriorating to their lowest levels in recent times and heightened tensions across the Taiwan strait, where the Chinese military carried out aggressive exercises for the first time in decades.

Chinese state daily Global Times cited analysts as saying that Lithuania could face greater consequences, including a breakdown in diplomatic ties, if it continued “on the wrong path,” while adding that the sanctions served as a warning for other countries.

The Chinese foreign ministry dubbed Vaiciukeviciute’s Taiwan stay – which came on the back of a June visit by the Lithuanian deputy minister for economy and innovation and his counterpart from the agriculture ministry – as an “egregious and provocative act.”

“Lithuania undertook the obligation not to establish official relations or engage in official contacts with Taiwan, but it has time and again reneged on its commitment and apparently acted in bad faith,” Chinese foreign ministry spokesperson Wang Wenbin said on Thursday, warning of “resolute actions” against “certain individuals in Lithuania.”

China views Taiwan, a self-governing territory since 1949 when the Chinese nationalists of the Kuomintang took refuge there during a civil war, as a rebel province and has not ruled out use of force to achieve “reunification.”

Lithuania-China ties have worsened over the past year after the European country allowed Taiwanese representatives to open an office in its capital Vilnius under the name of “Taiwan,” which led to Beijing summoning the Lithuanian ambassador and downgrading diplomatic ties.

Beijing’s retaliation against the move has included suspending the import of several Lithuanian products such as wood and veal, which has resulted in the European Union filing a complaint with the World Trade Organization. EFE