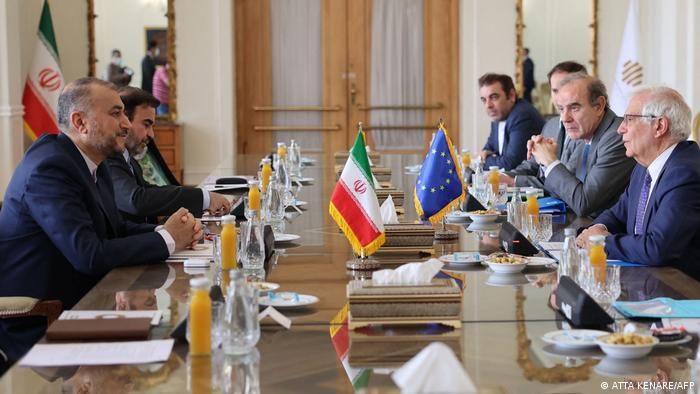 IRNA hasn't offered any details on the substance of the response, saying only that there were differences on three issues.

"The differences are on three issues, in which the United States has expressed its verbal flexibility in two cases, but it should be included in the text," IRNA reported.

"The third issue related to guaranteeing the continuation of (the deal), which depends on the realism of the United States," IRNA added.

Iranian Foreign Minister Hossein Amirabdollahian cautioned Monday — the proposed deadline for firming up a deal — that there were details in the arrangement that required further clarification.

"We have told them that our red lines should be respected... We have shown enough flexibility... We do not want to reach a deal that after 40 days, two months or three months fails to be materialised on the ground," Amirabdollahian said.

The three issues holding up the deal

Even though negotiations between the US and Iran have occurred intermittently for a period of 16 months now, there appears to be three main sticking points:

In June, the IAEA criticized Iran for failing to explain uranium traces found at three undeclared sites. The US, UK, France, Germany and other nations, passed a resolution condemning Iran's underground uranium enrichment at the time.

Iran seeks ultimate US guarantee: Tehran has sought guarantees that "no US administration" will renege on a revived pact.

However, the nuclear deal is a non-binding political agreement and not a legally-binding treaty, which means that President Joe Biden can't extend any such guarantees.

IRGC removed from terror list: Iran wants its Islamic Revolutionary Guard Corps (IRGC) removed from the US 'terror' list, a demand that Washington has refused so far.

The broad outline of the new deal was essentially agreed in March, after 11 months of talks in Vienna, but broke down largely because of Tehran's demand for the removal of IRGC.

No decision known yet

Amirabdollahian's Monday announcement came a week after the latest round of EU-mediated talks in Vienna ended with bloc foreign policy chief Josep Borrell speaking of a "good compromise."

"What can be negotiated has been negotiated, and it's now in a final text. However, behind every technical issue and every paragraph lies a political decision that needs to be taken in the capitals. If these answers are positive, then we can sign this deal," Borrell tweeted on August 8.

US State Department spokesman Ned Price said Monday the United States would submit its response to the EU's proposed text in private, but gave no timeline.

Representatives from the US and Iran, as well as from Europe, have been trying to reach an agreement that would result in the removal of US, EU and UN sanctions in exchange for the reinstatement of restrictions on Tehran's nuclear program.

These were the original goals of the 2015 pact known as the Joint Comprehensive Plan of Action, which aimed to prevent Tehran from building atomic weapons.

In 2018, the United States under then-President Donald Trump, decided to unilaterally leave the agreement.