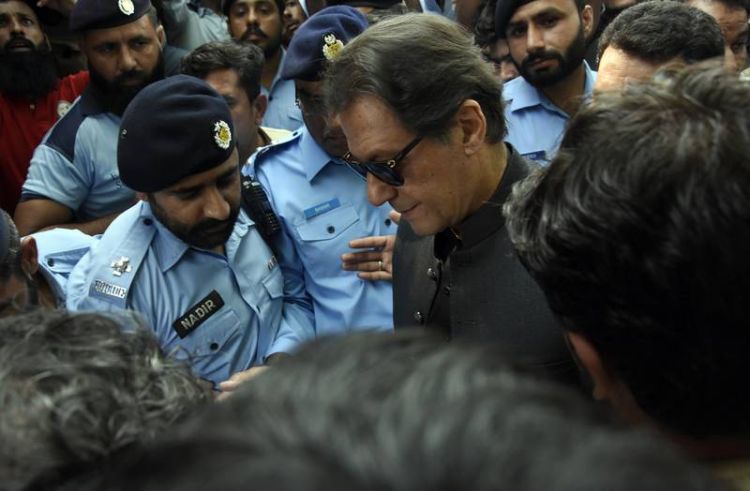 A court in Pakistan granted pre-arrest bail to former prime minister Imran Khan on Sunday, officials said.
It comes a day after an arrest warrant was issued for him in a contempt case in connection with his controversial speech against a judge and other officials at a public rally in August.
Crowds of party workers and supporters gathered outside Bani Gala, the residence of the former prime minister in Islamabad, to avert any attempt of his arrest by police.
At the rally, Mr Khan, chairman of the Pakistan Tehreek-e-Insaf party, reportedly warned judge Zeba Chaudhry and the judiciary of consequences over what he described as “biased” attitudes towards his movement.
“Islamabad High Court has granted pre-arrest bail to Imran Khan this morning,” Faisal Chaudhry, Mr Khan’s lawyer, told The National on Sunday.
The cricket star-turned-politician has been facing a spate of legal challenges since his ouster in a confidence vote in April by a united opposition led by his successor, Prime Minister Shehbaz Sharif, who is leading a multi-party government.
Last month, a court ordered the removal of terrorism charges from the contempt case against Mr Khan, saying his alleged offence did not match the charge, his lawyer Chaudhry said.
Mr Khan issued an apology in the contempt case to prevent a possible conviction and ineligibility to contest the elections for five years.
He has been leading rallies since his ouster, demanding snap polls, which the ruling coalition has rejected, and saying the elections will be held as scheduled later next year.
During recent public rallies, he said he would call for a march towards Islamabad to press the government into announcing early elections.
Mr Khan’s party rules the country's most populous province of Punjab and Khyber Pakhtunkhwa and has support from the two provinces that border Islamabad.